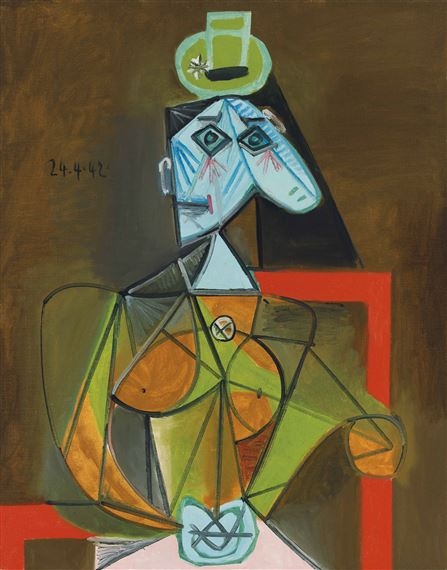 Masterpieces by art virtuosos Pablo Picasso, Kazimir Malevich and Claude Monet are a part of an auction at Christie’s London on June 20, the auction house said.

Pablo Picasso’s rarely exhibited “Femme dans un fauteuil” (1942), which depicts his great muse of the period Dora Maar, the surrealist photographer and painter, will among those on auction.

Maar’s presence in Picasso’s life, from the moment they met in 1935 until the time their relationship ended around 1945, inspired some of the greatest portraits of the artist’s prolific career.

The highly coveted painting was painted during the Second World War.

“It is a painting that has been rarely exhibited having remained in the artist’s family for many years,” Christie’s said in a statement.

Another highlight of the auction will be French impressionist Claude Monet’s “La Gare Saint-Lazare, Vue extérieure” (1877).

A painting about a busy railway station, it shows the coming of a modern age of steam trains and iron railway bridges in the fast-urbanising city of Paris.

This painting is one of the 12 canvases painted by Monet showing the Gare Saint-Lazare station.

“This superb painting describes Monet at his impressionist best, capturing in quick, bold brushstrokes the energy of metropolitan Paris as described by the sound and fury of the glorious steam trains as they left the Gare Saint-Lazare on their journeys northwards out of the city,” Christie’s Global President Jussi Pylkkänen said.

It is a pure landscape painting whose motif of peasant dwellings surrounded by stylised treetops is borrowed from Russian primitive art, the auction house said.

The three paintings are highlights of the Impressionist and Modern Art Evening Sale at Christie’s, along with other artworks by noted artists.

This auction is part of a larger series of six auctions that are on from June 15-29. Most lots can be viewed online on www.christies.com.

Boosting The Morale Of Theatre Fraternity