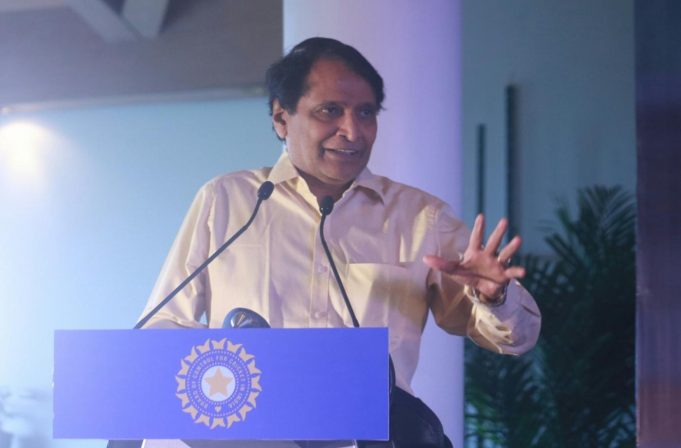 The fifth meeting of the UAE – India High Level Joint Task Force on Investments (‘the Joint Task Force’) was held today in Abu Dhabi, with significant progress being made on a number of key issues of mutual importance.

The meeting was co-chaired by H.H. Sheikh Hamed bin Zayed Al Nahyan, Chairman of the Abu Dhabi Crown Prince’s Court, and Suresh Prabhu, the Indian Minister of Commerce and Industry. Senior officials and representatives of corporate organisations from both countries also took part in the meeting.

The two sides noted the positive outcomes achieved by the Joint Task Force to date, expressed satisfaction at the level of bilateral trade and investment between the two countries, and agreed upon the need to further explore ways to facilitate investment in key Indian and UAE sectors with potential for economic growth.

The two sides deliberated in specific detail on the implementation of a 2017 memorandum of understanding between India’s Road Transport and Highways Ministry and the UAE’s Federal Transport Authority. Discussions focused on opportunities for cooperation and investment in the railways and road sectors of both countries. Both sides also discussed a number of potential investment projects in India in the transport, real estate and energy sectors.

Other key points of discussion at the meeting included the current classification of all UAE based sovereign investment entities under a single 10% Foreign Portfolio Investors (FPI) limit in India, airline capacity entitlements and points of destination in India for passenger operations from UAE, and the progress of efforts to expedite the resolution of the outstanding issues experienced by certain UAE companies (Etisalat and DP World) in India. In this context, both sides recognised the importance of resolving these issues for the continued growth of broader economic relations, and agreed to convene direct consultations between their respective parties during the first quarter of 2018 to discuss and resolve these issues in a timely and mutually satisfactory manner.

Commenting on the fifth meeting of the Joint Task Force, the Indian Minister, Suresh Prabhu, Co-Chair of the Joint Task Force, said: ” The discussions held today will open new and bigger opportunities of investments from UAE to India. Through this platform, we have been able to resolve a number of outstanding issues faced by investors in both the countries. We look forward to deeper engagement between India and UAE in the coming years.”

Prabhu spoke about Government of India’s ongoing economic reforms including the nation-wide implementation of a Goods and Services Tax to make India an even more attractive investment destination. He said, “The impact of these measures is reflected in the record FDI inflows of over $ 60 billion in 2017 and the impressive jump of 30 places in the World Bank’s Ease of Doing Business rankings. We welcome the commitment by ADIA to invest $ 1 billion in NIIF. We also welcome the proposals that we have received from DP World, Emaar, the Sharaf group and several leading Indian businessmen in diverse sectors including logistics, inland waterways, real estate, food processing, hospitality, retail, healthcare, education and others. These are poised to transform the nature of the India-UAE investment relationship.”

H.H. Sheikh Hamed bin Zayed Al Nahyan, Co-Chair of the Joint Task Force and Chairman of the Abu Dhabi Crown Prince’s Court, said: “Since its creation in 2012, the Joint Task Force has been an effective platform for promoting, facilitating and expanding investments between India and the UAE, and for addressing key constraints that our respective companies are facing in each country. We look forward to continuing our strategic dialogue to achieve ever-closer economic cooperation between the UAE and India and, ultimately, to realise the full potential of our strategic relationship.”

Since its creation in 2012, the Joint Task Force has focused on creating platforms and frameworks conducive to the expansion of bilateral economic and investment cooperation. This work has assisted in the signing of a number of significant agreements and initiatives between Indian and UAE entities, including: a Bilateral Investment Promotion and Protection Agreement (BIPPA) between India and the UAE; a memorandum of understanding between the Abu Dhabi National Oil Company (ADNOC) and Indian Strategic Petroleum Reserves Ltd (ISPRL) to establish strategic oil reserves in India, and; the active participation in the development of the structure and strategy of India’s National Infrastructure Investment Fund (NIIF), as a vehicle for investments in Indian infrastructure assets by the UAE’s institutional investors and other international institutions. This culminated in the signing of an investment agreement worth US$1 billion between NIIF and a wholly-owned subsidiary of the Abu Dhabi Investment Authority (ADIA), which represented the first institutional investment in NIIF’s Master Fund.