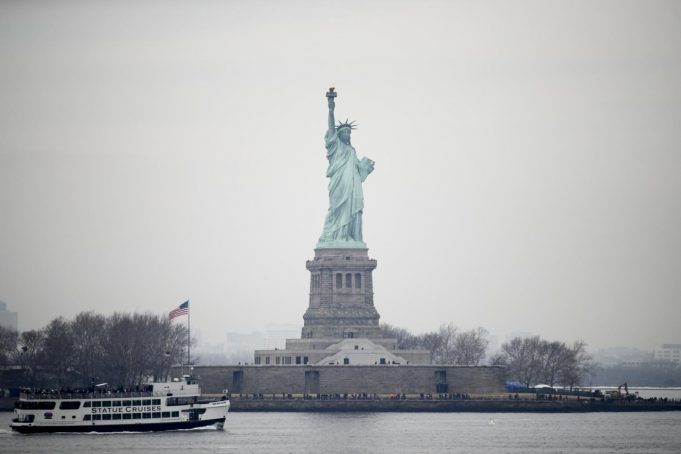 A woman was taken into custody after she climbed up to the robes of the Statue of Liberty to protest against President Donald Trump’s “zero tolerance” policy, prompting the separation of thousands of children from their immigrant parents…reports Asian Lite News

Authorities on Wednesday tried to talk the woman identified as Therese Patricia Okoumou, down but she refused to leave.

For nearly three hours, she crossed the base of the statue, at times sitting in the folds of the statue’s dress and under Lady Liberty’s sandal.

Okoumou was part of a group of protesters and had declared that she wouldn’t come down until “all the children are released”, a New York Police Department source told CNN.

She was brought down the statue with the help of about 16 officers with the New York City Police Department, Officer Brian Glacken said in a news conference Wednesday evening.

Earlier on Wednesday, other protesters unfurled a banner over a railing around the base of the statue saying “Abolish ICE (Immigration and Customs Enforcement)!”

At least seven people were arrested on Liberty Island and the site was closed to visitors.