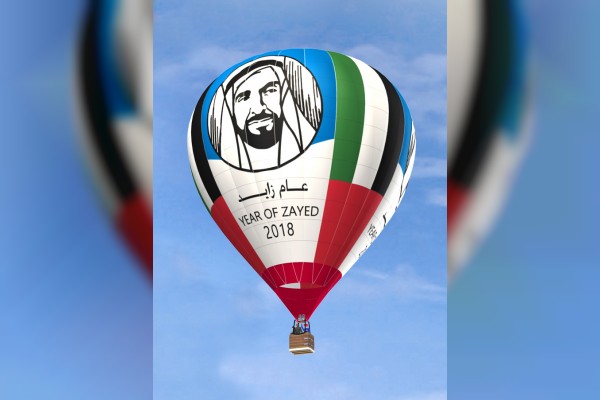 The UAE Hot Air Balloon Team has completed the final design phase of the Year of Zayed Balloon, in line with the directives of President His Highness Sheikh Khalifa bin Zayed Al Nahyan declaring 2018 as the Year of Zayed.

Year of Zayed commemorates the Founding Father, the late Sheikh Zayed bin Sultan Al Nahyan, and showcase the country’s international achievements as a result of his comprehensive humanitarian vision, which made the UAE an oasis of humanity and progress and a destination that embraces all global cultures.

Captain Pilot Abdulaziz Nasser Al Mansouri, Head of the UAE Hot Air Balloon Team, stated that the Year of Zayed Balloon, which will fly to several Arab and foreign countries, reflects the loyalty and appreciation of the nation’s youth to the wise leadership, led by His Highness Sheikh Khalifa, and his brother, the Vice President, Prime Minister and Ruler of Dubai, His Highness Sheikh Mohammed bin Rashid Al Maktoum, as well as the comprehensive support of the wise leadership for the UAE’s youth. The balloon’s international mission will be accompanied by the launch of a related international exhibition in several countries, he added.

Al Mansouri stressed that the balloon’s journey will include several international festivals and events, including the annual ‘UAE Hot Air Ballooning Festival’.

Hassan Al Mansouri, Secretary-General of the UAE Hot Air Balloon Team, said that the Year of Zayed Balloon is equipped with many advanced technical equipment and electromagnetic sensors, which will enable it to be tracked by satellites during its journey while noting that the balloon will bear the UAE flag and the Year of Zayed logo in both Arabic and English, with the aim of conveying the message of the UAE’s leadership and people across the world.