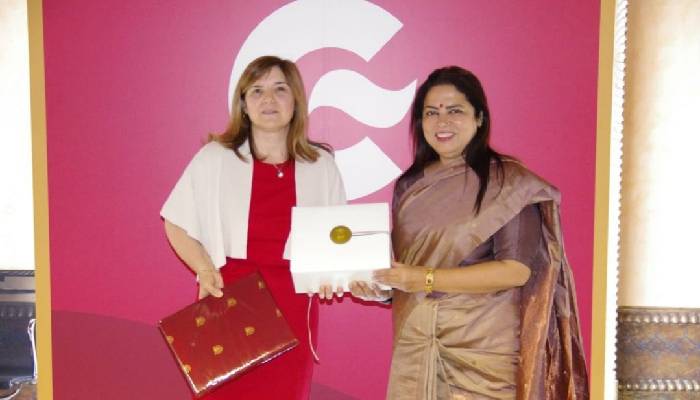 India and Spain undertook a comprehensive review of bilateral relations, especially after the Covid-19 hiatus, during Minister of State (MoS) for External Affairs Meenakshi Lekhi’s visit to the country.

According to the release, the situation in Afghanistan was discussed.

Both sides agreed to hasten negotiations towards an early conclusion of the Civil Nuclear Agreement, it stated.

They also acknowledged support to each other during the worst phase of the Covid-19 pandemic, the statement added.
The increasing mutual support in election to international bodies was also noted with satisfaction, it informed.

Lekhi conveyed that India looked forward to the visit of the Spanish FM to India at a mutually convenient time to prepare for a subsequent visit by the Spanish President to India, the statement mentioned.

In her talk the MoS shared India’s philosophy of international development cooperation and the extent of assistance extended to different parts of the world, it added.

She also met the Board Members of the Casa de la India over a working lunch hosted by the Mayor of Valladolid.

Cooperation with the Cervantes Institute of Spain was discussed with Secretary for International Cooperation along with cooperation in Film making, Sports and Science and Technology, it highlighted.

Both sides also congratulated each other for the recent inscription of Kakatiya Temples, as well as Paseo Del Prado and Buen Retiró In the UNESCO Word Heritage List, the statement continued.

MoS Lekhi also briefed the Spanish side on India’s ongoing celebrations to mark 75 Years of its Independence, it added. During her visit, she also engaged with the Indian Diaspora at a Community Reception hosted in her honour.

She had a focussed interaction with Indologists, ICCR Alumni, practitioners of Indian performing arts and dances and Indo-philes, it said.

MoS also participated in a Yoga Master class at the Indian Embassy along with Spanish Yoga teachers and practitioners, the statement said. (India News Network)