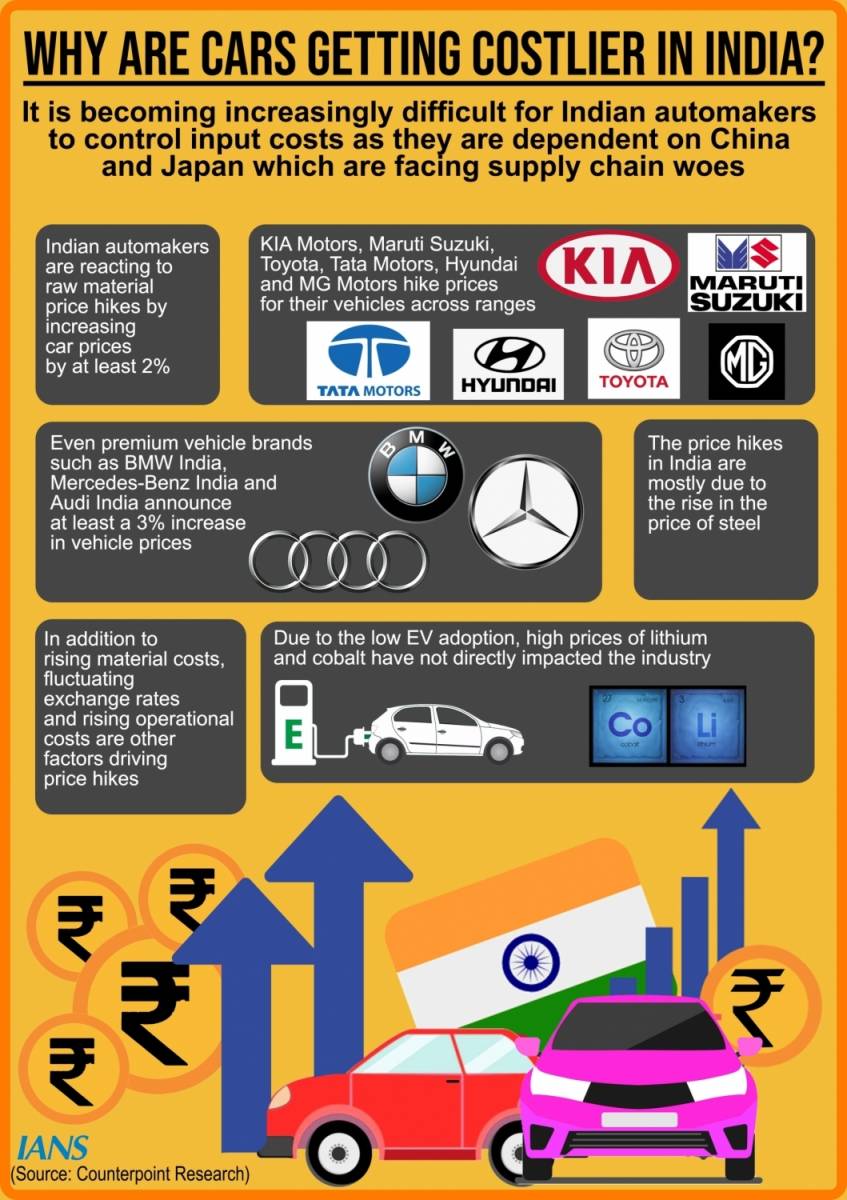 Due to the low electric vehicle (EV) adoption, high prices of lithium and cobalt have not directly impacted the industry in India…reports Asian Lite News

It is becoming increasingly difficult for Indian automakers to control input costs as they are dependent on China and Japan which are facing supply chain woes, resulting in price hikes across vehicle ranges, according to a new report.

Indian automakers are responding to raw material price hikes by at least 2 per cent price hike on average, according to Counterpoint Research.

KIA Motors has increased prices of all its vehicles. Maruti Suzuki, India’s largest passenger vehicle (PV) maker, has also increased the average price of its cars by 8.8 per cent since January.

“Toyota, Tata Motors, Hyundai and MG Motors have also increased prices for their vehicles across ranges. Even premium vehicle brands such as BMW India, Mercedes-Benz India and Audi India have announced at least a 3 per cent increase in their vehicle prices,” said Soumen Mandal, senior research analyst.

Due to the low electric vehicle (EV) adoption, high prices of lithium and cobalt have not directly impacted the industry in India.

“The price hikes in India are mostly due to the rise in the price of steel. Steel is used in manufacturing vehicle chassis and body. Nickel-containing stainless steel is used in some drivetrain components,” Mandal added.

In addition to rising materials costs, fluctuating exchange rates and rising operational costs are other factors driving price increases in the country.

With the semiconductor shortage beginning to ease, 2022 was expected to be a better year, as indicated by increased sales during the initial months.

But Russia’s invasion of Ukraine and fresh Covid waves in China have further delayed the industry’s recovery.

“Restricted supplies of critical raw materials procured from Ukraine and Russia are causing new supply chain impacts, driving up raw material prices including that of lithium, cobalt and nickel — the latter by 60 per cent — as well as aluminium and, to some extent, steel,” Mandal explained.

The recent cost increases have already affected the EV industry.

2021 saw EV sales rising by more than 200 per cent but price increases are likely to put the brakes on a continuation of this fast growth.

“For 2022, we expect global passenger vehicle sales will be around 72 million, some 5 million units lower than our earlier projections,” said the report.