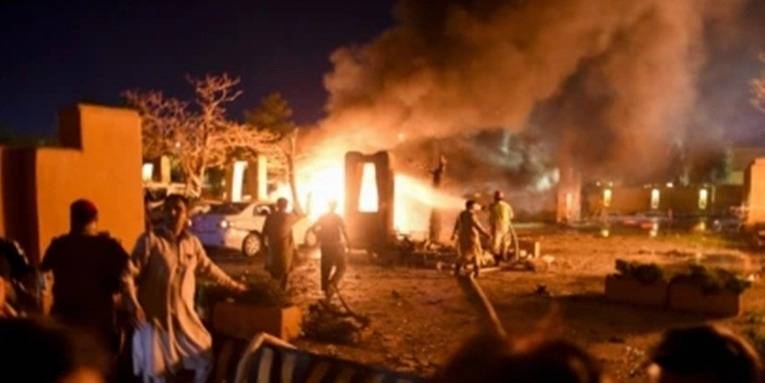 Ignoring Taliban’s protests of Pakistan air strikes inside Afghanistan, the Pakistani foreign office on Monday summoned the Afghan envoy in Islamabad, and told him that Pakistan has run out of patience with the Afghan Taliban…reports Asian Lite News

The Pakistanis are miffed with Kabul as the regime has sheltered terrorists, especially the Tehreek-e-Taliban Pakistan (TTP) which has been mounting raids with impunity across the Durand line, which defines the Pak-Afghan border.

Without admitting the controversial air strikes that killed scores of Afghans, the foreign office gave a detailed statement on Sunday about the circumstances that led to the recent incidents.

“In the last few days, incidents along the Pak-Afghan Border have significantly increased, wherein Pakistani security forces were targeted from across the border,” it said in a statement.

The Pakistan Foreign Office said that the Taliban were conveyed many times in the past several months “through institutional channels for effective coordination and security along our long shared border – the Durand Line. They were asked to hand over leaders of banned militant proscribed TTP, but so far nothing has happened.

“Unfortunately, elements of banned terrorist groups in the border region, including TTP, have continued to attack Pakistan’s border security posts, resulting into martyrdom of several Pakistani troops. On April 14 too, seven Pakistan army soldiers were martyred in North Waziristan district by terrorists operating from Afghanistan,” said the Pakistan foreign office in a statement.

The Taliban claimed that at least 45 civilians had been killed, including at least five children and 7 women, in the air assaults. There were protests in Khost on Saturday in response to the attacks. Without mentioning the air strikes, the Pakistani sources claimed that 33 TTP fighters were killed.

The TTP has vowed to avenge the killings of its fighters. Many unverified social media accounts of the group have warned the Pakistani army of dire consequences.

“The Pakistani military has conducted airstrikes on Afghan soil, killing children. Afghanistan is under Pakistani invasion and the Taliban is a proxy force of ISI. We are coming after you Pakistan to burn you from inside,” said one user posting the video clip of protests.

The Afghan news channel Aamaj News shared the clips of the Taliban fighters deployed at the Durand Line to retaliate Pakistani invasion.

“If fighting starts with Pakistan, I am a suicide attacker, I am ready to explode myself with a bomb detonated car inside of Pakistan,” said a fighter.

A TTP’s social media account shared the picture of a Pakistani woman fighter pilot who allegedly took part in the airstrike.

“Inshallah, we will take revenge from this apostate, savage, cruel and infidel army,” says the post.

ALSO READ:SPECIAL: Is Pakistan doing a Ukraine on Afghanistan?

The unverified pro and anti TTP social media accounts have been claiming that Pakistan’s air strikes were led by women fighter pilots of Pakistan air force.

“The bombing of TTP bases in Khost and Kunar, Afghanistan was carried out by this Pakistani female pilot Marium. Imagine how TTP terrorists feel like when a women bombs them in the Waziristan. Not a good feeling for a group that thinks that women should stay in a house,” wrote a war correspondent named Frenkie Mark.

A pro TTP user, shared the picture of another woman pilot and wrote in his post that “we will take revenge from this apostate, savage, cruel and infidel army.”

According to Pakistani watchers, it appears that after several months of failed efforts to deal with TTP, Islamabad’s patience with the Taliban government is running out fast. After the Taliban’s August takeover, Pakistan hoped the Taliban would restrain the TTP out of gratitude for Pakistan’s help and support for the insurgency. But the Taliban did the opposite: It began enabling the TTP’s buildup of a major war machine in Afghanistan.