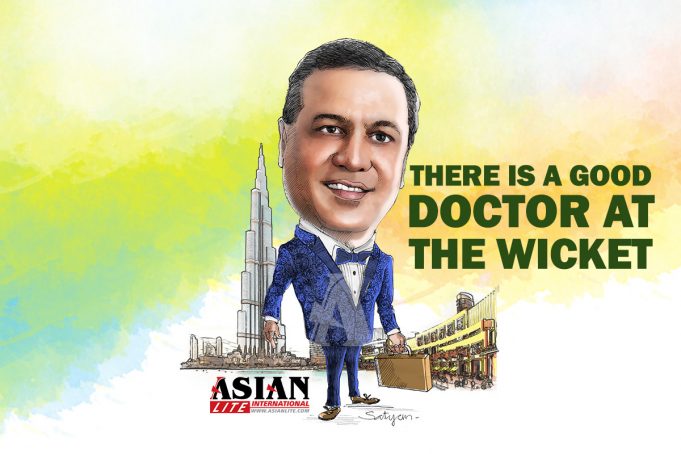 Dr. Nawab Shafi Ul Mulk is one of the prominent members in the Indian community in the UAE. As a popular doctor and a very successful business man, he has been prominently featured in several global magazines including Forbes. He has won many international awards in recognition of his professionalism and business acumen. Dr Shafi is also a keen sportsman and co-owns T10’s Kerala Kings team. Asian Lite’s Kaliph Anaz meets Dr Shafi to find out his formula for success and more about his journey.

Despite your education in the UK, you chose Dubai to settle down. What prompted you to arrive in the UAE?

It has been a wonderful journey, I have to say. From the day I came here for the first time, way back from UK to India after finishing my fellowship in vascular imaging from Milton Keynes, UK. I had come to watch the India Pakistan cricket match in Sharjah Stadium as I was a passionate sportsman. My brother was there in Sharjah. That one stopover on the way to India changed my entire destiny. A new private hospital was opening in UAE and my brother Shaji asked me whether I was interested in working in the UAE.

I probably belong to first generation of radiologists who were taught the functionings of the MRI and CT scans and went to see the hospital, but it still didn’t have these facilities. But the spirit and whole concept of the hospital made me join them. Looking back at the three-decade journey, I can place it in three categories by every ten-year milestone. First decade purely as a radiologist, I worked six years in this private hospital, learned a lot of lessons as a doctor and as an entrepreneur. After six years, I told them I am moving out.

My third decade is a very wonderful journey as I started tele-medicine for the first time in UAE. Initially, people were not aware. But as we grew, as the concept also grew through these decades and now touches the life of thousands of people. Today with God’s grace I am fortunate to be seen as a successful contributing community member.

If I look back, I came here in 1990s, there is an amazing growth. The whole world is now watching the UAE. Expatriates from over 200 countries are welcomed here. The principles of H H Sheikh Zayed led to the stability and progress of this country. If you look at the present economical situation, UAE is the second largest in economical growth amongst the GCC countries. The credit for all these achievements have to go to Sheikh Zayed. The wonderful platform and environment to every individual from across the world to come and make their dreams come true. When I came here, apart from my brother’s presence and family’s presence, the financial side was zero. Now Alhamdulillah, we are successful because of the foundation and vision laid by HH Sheikh Zayed.

Recently the Crown Prince of Abu Dhabi was in India and Prime Minister Modi visited UAE. So what is your take on Indo-UAE relationship?

I think HH Sheik Zayed’s foreign policy is a crucial factor in winning friends both regionally and internationally. His policies are based on his wisdom, sense of moderation, fairness, and his doctrine of supporting truth and justice. Overall, he has laid a healthy foundation in the economical and political front with all countries in the world. India is growing exponentially and our Prime Minister Narendra Modi is taking the country to new heights. I personally feel and I think there is a wonderful relation in between India and the UAE. It is developing to benefit people in both the countries.

You are a pioneer in modern medicine in the UAE. Could you tell us about your medical establishments?

My establishments are now spread into more than 60 countries. Every patient is inclined to get second opinions for their ailments. Telemedicine has been created to help them. So that one can get a second opinion within 10 or 15 minutes on an urgent basis. We have made the platform for global access. So anyone who needs a second opinion about a surgery or anything in that matter Global Hawk Telemedicine and Tele Radiology can give it immediately.

You are successful in many fields, what is your greatest achievement?

Alhamdulillah, God has been very kind and blessed me. The foundation, environment and culture here have helped me. I cannot point out a single achievement as cumulative success in the past years together gave me this success.

I along with my friend Hussain Adam Ali have invested in the Kerala Kings team. Of course, many asked me why Kerala Kings? The reason is I was offered six different teams I said I would like to go for Kerala Kings, I was stubborn about it. One reason is my wife comes from Kerala and so I am an adopted so-in law of Kerala. The second reason is that Kerala community in the UAE is very tightly knit. You can see the secular unity which helped them to become the most successful expat community in the UAE. They are educated and I am also very proud of their culture. They are always together and helping each other and very secular nature. An ideal for any modern community.

What is your message to the young entrepreneurs?

I think, every expatriate is allowed to dream in the UAE.  Dreams can come true in Dubai. It’s very important that you have your goals, there is a need to work hard and no short cuts. It’s the perseverance and need to be very focused. I have seen several people growing to new heights within 10 years of business.  So you are part of the success story here. All you need is the heart to dream and the will to make it happen and sure it will happen.