“Cyclone Vayu is about to reach Gujarat coast. I appeal to all Gujarat Congress workers to be ready to help in all the areas that come in the way. I pray for the safety and well-being of all the people in the areas affected by the cyclone,” he tweeted.

Centred nearly 600 km south of the Saurashtra coast in Gujarat, cyclone Vayu is likely to make a landfall in the state on Thursday, according to the MeT officials.

Cyclone Vayu, which was located around 690 km south of Veraval on Tuesday morning, could hit at a velocity of 110 km to 135 km per hour when it makes a landfall, officials said. 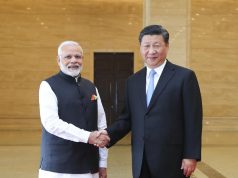 Indo-China talks over Ladakh will continue