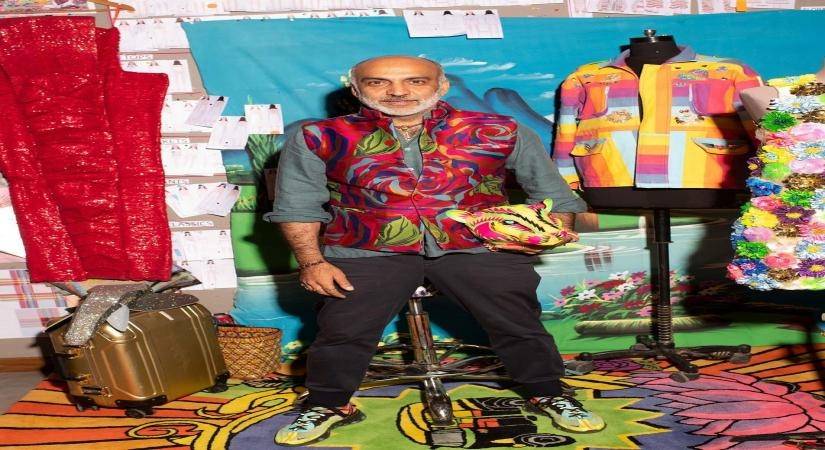 For many years Indian fashion had been struggling to make its mark on the international fashion map, until Manish Arora. He became the first Indian designer to show at Paris Fashion Week for ten consecutive years, and was also the first Indian creative director of a French heritage fashion house (even if he only lasted a year at Paco Rabbane)…writes Sujata Assomull.

The maverick designer is back in the headlines this week. It all started with a New York Times story that came out on Monday titled, “For a Leading Light of Indian Fashion, All That Glitters Is Not Gold”. The article looked at how the “breakout star” of Indian fashion is now in debt.

A thoroughly researched, deep dive into the status of Arora’s fashion business was an article that was waiting to be written. Indian fashion commentators immediately took to social media, many felt the international newspaper did not do justice to the creative genius of one of the country’s most talented contemporary designers.

The New York Times story reveals the designer used company money for personal expenses and helmed a business with a long list of unpaid wages ranging from helpless kaarigars to senior level employees. Something which is hard to forgive.

Over the years I had heard stories from many suppliers and collaborators and even other journalists on financial misdemeanors and disrespectful behaviour but no one was ever willing to go on the record. (I must add here professionally I have had a courteous relationship with him.) It is now reported that his company is in liquidation.

The designer who lives between Paris and Dubai, is known for his love of the (very) good life. We do not know his side of the story as he has refused to comment. Arora was known as India’s John Galliano, ironically Galliano had his own fall from grace. This bad boy is now back ‘in fashion’, humbler, with less flamboyance, but still full of creative talent. Galliano seems to have learnt his lessons.

Yet one cannot take away from Arora the fact that he added a fresh “bold and beautiful” vocabulary to Indian fashion. The list of his collaborations is impressive– from Reebok to MAC Cosmetics. International celebrities like Lady Gaga, Kate Perry and Nicki Minaj wore his museum-worthy creations.

This year should have been a landmark moment for the designer, as it is 15 years since his London Fashion Week debut. (He moved to the Paris edition a few seasons later.) Of course the good news is that in these 15 years Indian fashion itself has pivoted, it is no longer so caught up in the glamour of it. It has matured, and realised that before going global you need to be a successful label in your own market. That is not to say that Indian design is not making a mark internationally.

Anita Dongre has a flagship in New York, Rahul Mishra has become the first designer to show at Paris Couture Week and artisanal slow fashion label 11.11 was recently onboarded by luxury e-tailer MatchesFashion. All of these labels have made Indian craftsmanship their backbone.

With independent labels and conscious design being seen as the new mood of global fashion right now the timing could not be better for homegrown fashion. It is all a question of striking the right balance- between commerce and creativity, between being Indian yet having an international outlook and knowing that while fashion is a glamourous industry, those in the business must not get caught up in the trappings of it.

While India may have a craft and design heritage that few countries can rival its fashion industry is young. The fact that international newspapers are focusing on Indian fashion is a sign that its designers are being noticed. Mostly however international media chooses to focus on sweatshops and supply chains, but in time this too will change. And in the larger narrative, Manish Arora will always be one of India’s pioneering designers. How his own story will end is hard to say this is an industry that loves a good comeback. For now it seems his business is in ruins, and there are many questions he needs to answer.

The writer Sujata Assomull is an IANSlife columnist. Assomull is the author “100 Iconic Bollywood Costumes” and was the Founding Editor In Chief of Harper’s Bazaar, India.

Also Read-Mexico, US to strengthen ties on migration

Nearly half of Americans plan to get vaccine: Survey