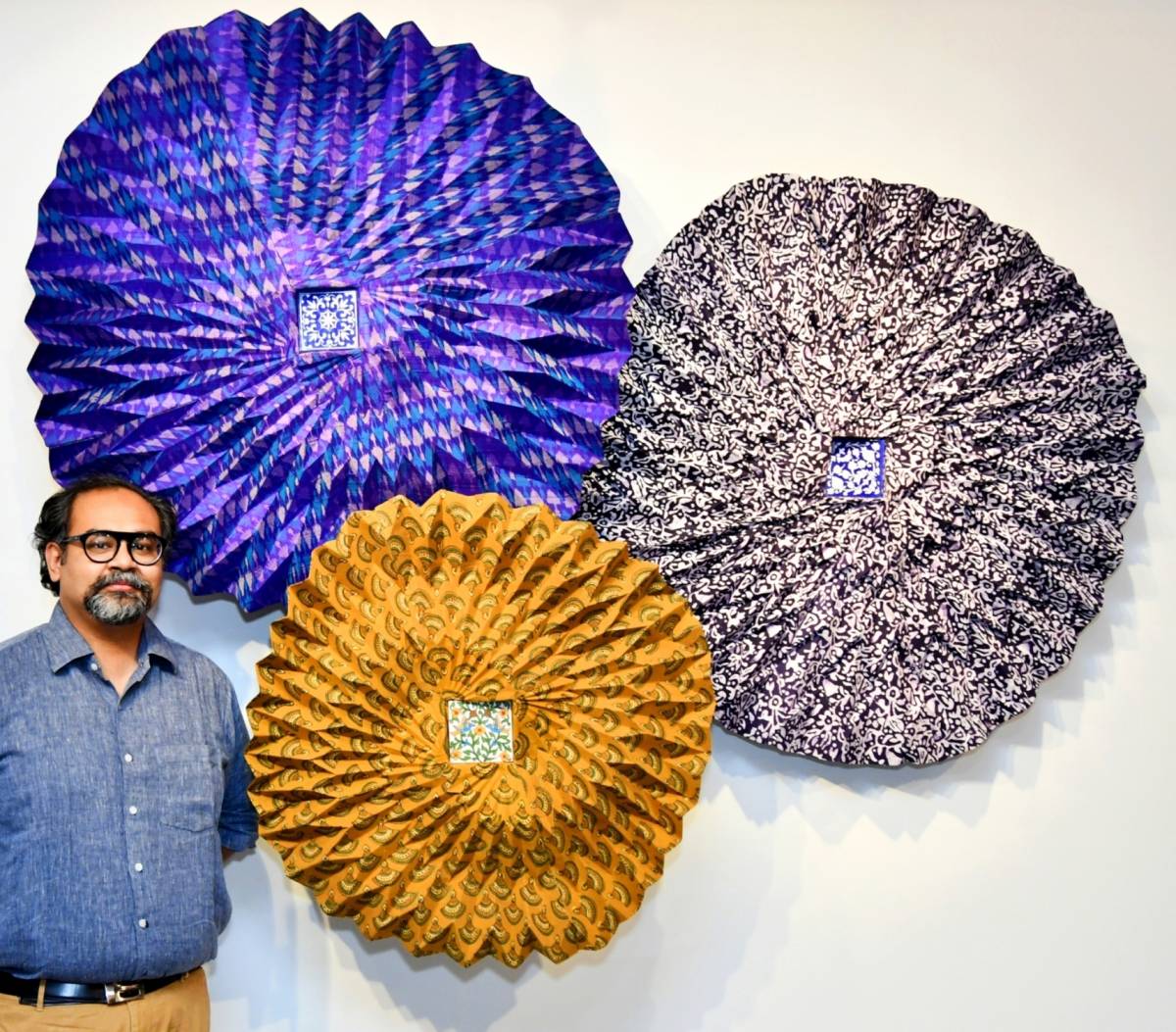 He quotes Plato – “Geometry aims at the eternal.” Origami artist Ankon Mitra feels that we have short lives as humans at the timescale of the universe. That despite the fact that there is little we understand, we spend most of our lives bickering and negotiating with others over specious matters. “We have many conflicts and differences of culture, language, religion and opinion. Geometry (through ‘folding’) offers us an opportunity to paper over these differences and speak a universal language. It also offers us a rare chance to converse directly with ourselves – the act of folding is repetitive, it is like turning rosary beads in one’s hands,” he tells.

As his solo ‘A Pilgrim’s Progress’, presented by Gallery Art Positive and curated by Uma Nair gets set to open on April 26 at Bikaner House in the capital, Mitra says that it is immediacy, intimacy and simplicity of the act of folding that makes it sublime. “One sheet of paper is all that is required to make a beginning. No tools, brushes, paints, cutting, adding or removing – only transformation – of that sheet of paper, and of ourselves,” says the artist who will be presenting his third solo which comes after a gap of six years.

A suite of 22 new works has been created exclusively for this occasion, underlining an eclectic synthesis of elements from several art historical movements associated with origami, including design dynamics in light, space and the magic of folded forms.

It was in fact a chance talk with a gardener at the Kew Gardens that led him to a keener observation of the folded world all around him.

Adding that nature uses folds to accomplish many tasks, to be frugal, to make weak materials strong, to create flexibility, to save energy, ultimately to do more with less, he says, “Visual beauty is a by-product of the processes and systems of folding. From rivers snaking through a landscape (path of least resistance) to our eyelids (multi-tasking), from branches of trees (folds build strength and balance against gravity) to our brains (hundreds of thousands of kilometres of neural matter folded and packed into a very small volume), the accomplishments of nature through folding are astonishing and awe-inspiring. My art is a direct response to my ongoing research and documentation of folding systems across diverse natural phenomena.”

The artist feels that things around us connect and form intricate woven patterns, though often it feels like a ball of jumbled and knotted wool and layers of obfuscation. “I have realized it is best to start with a very simple seed and to then let the seed become a gigantic tree on its own, through slow nurture and gradual comprehension. In this show, for instance, the simple premise was ‘A Pilgrim’s Progress’.”

Mitra says that there is an increased interest in Origami as a tool to learn and expand the mind, as a teaching aid in subjects like Mathematics and Geometry, in schools as well as colleges of architecture, engineering and design. “Origami is moving beyond flapping cranes, paper boats and aeroplanes. I get invited to conduct workshops at schools and colleges – to connect new ways of thinking (and doing) with traditional pedagogy. The simplicity and immediacy of the technique render itself well for this.”

For someone who has an ongoing love affair with Japanese words which have no English equivalents – Komorebi (sunlight filtering through the leaves of trees), Kintsugi or Kintsukuroi (gold joinery or gold mending), Ikigai (a reason for being), Gyotaku (fish-stone impression), he smiles, “I respond to the words directly and find they are able to powerfully shape my response to them.”