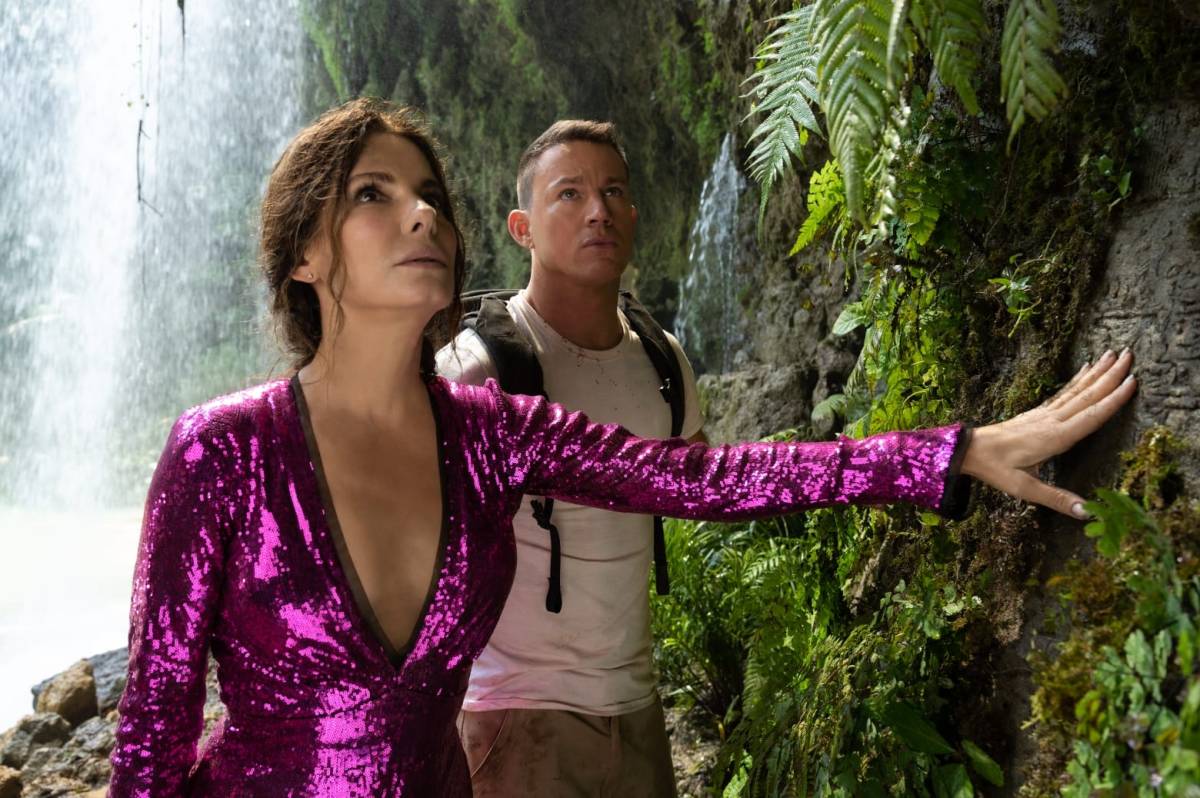 At the promotion event, wearing a purple sequined outfit and ill-at-ease, Loretta makes a mess of the event and exits as quickly as possible, only to be abducted while waiting for her transport to take her home…reports Troy Rebeiro

‘The Lost City’ is a tepid treasure hunt caper that seems to be inspired by the 1983 released ‘Romancing The Stone’.

In this film, Sandra Bullock plays Loretta Sage, a widowed novelist mourning the death of her archaeologist husband, and prefers being low-key.

It is her publisher Beth Hatten (Da’Vine Joy Randolph), who pushes Loretta, to complete the book and promote it.

So, after Loretta finishes her novel titled, ‘The Lost City of D’, she grits her teeth and begins the promotion tour with Alan (Channing Tatum), who pretends to be Dash, the hunky romantic hero and the cover model of her novels.

At the promotion event, wearing a purple sequined outfit and ill-at-ease, Loretta makes a mess of the event and exits as quickly as possible, only to be abducted while waiting for her transport to take her home.

She soon discovers that the billionaire archaeology enthusiast, and scion of a media empire, Abigail Fairfax (Daniel Radcliffe), is the mastermind behind her kidnapping. He has been trying to locate an ancient relic – the long-lost precious Crown of Fire, hidden somewhere on a remote jungle island, and he believes that Loretta is the only person who can help him find it, as she mentioned something to this effect in her novel.

When Loretta refuses to cooperate, one of Abigail’s men drugs her and puts her on a jet en route to the forgotten island, where she is expected to translate stone carvings and find the fabled relic.

Meanwhile, Alan behaving like the adventurer in Loretta’s novel sets off to rescue her. He enlists the help of an ex-Navy Seal, Jack Trainer (Brad Pitt), for a search-and-rescue mission which also goes terribly awry, leaving Alan to get through the jungle and to the woman he realises he is in love with.

In true screwball fashion, the two have several contrived and farcical encounters while they attempt to escape the jungle and the clutches of the kidnappers. The relatively plotless meandering of the narrative might test the patience of some viewers, but there are some pleasing bits of action sequences to demonstrate Alan’s brawn. There is also some titillation, where Loretta warms up to Alan after seeing him with his pants down.

Sandra Bullock as Loretta is disappointingly gloomy and mechanical in her demeanour. Similarly, Channing Tatum does not offer us anything exceptional. Nevertheless, he is fun to watch here as he pairs well with Bullock. The only ones who stand out in this film are Daniel Radcliffe and Brad Pitt. Brad Pitt’s scene-stealing scenes provide some hearty laughs, unfortunately, his is only an elaborate cameo.

Overall, ‘The Lost City’ is an old-fashioned romantic comedy that- is not weighed down by heavy drama.