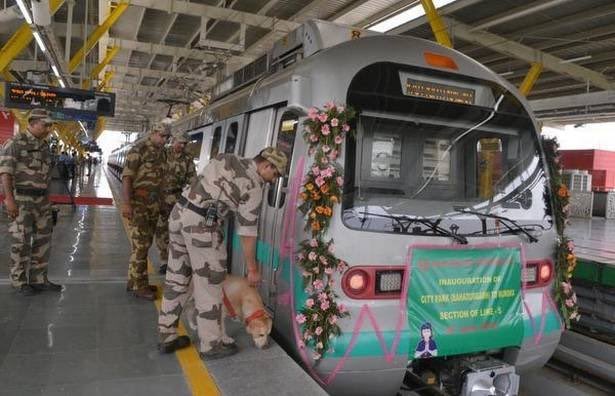 In his inaugural speech, Modi emphasised how the Metro has had a positive impact in Delhi-NCR region and will “facilitate an ease of living and travel in Haryana’s Bahadurgarh in the same way”.

“After Gurugram and Faridabad, Bahadurgarh is the third largest area to be connected to Delhi. With the opening of Mundka-Bahadurgarh section, the Metro is now covering 26 km in Haryana. It will prove to be a big help for students and businessmen to travel between Delhi and Haryana,” he said.

The route has seven elevated stations in total, of which four are in Delhi (Mundka Industrial Area, Ghevra, Tikri Kalan and Tikri Border) and three in Haryana (Modern Industrial Estate, Bus Stand and City Park).

Modi said the Metro used at least “75 per cent India-made products and equipment”.

“We have started building Metro coaches in the country. The Central government has set up advanced plants in Vadodara and Chennai,” he said.

“Earlier, every state used to work in its own way. All the decisions were made by the state governments, ministers and departments and that’s why there was no policy for work related to the metro.

“But under the 2017 Metro policy, all these issues will be addressed. No matter where the metro is made, a set standard will decide on how things will work,” he said.

He also mentioned a “regional rapid transport system”, which will connect Delhi to Sonipat, Alwar and Rohtak in the coming days.