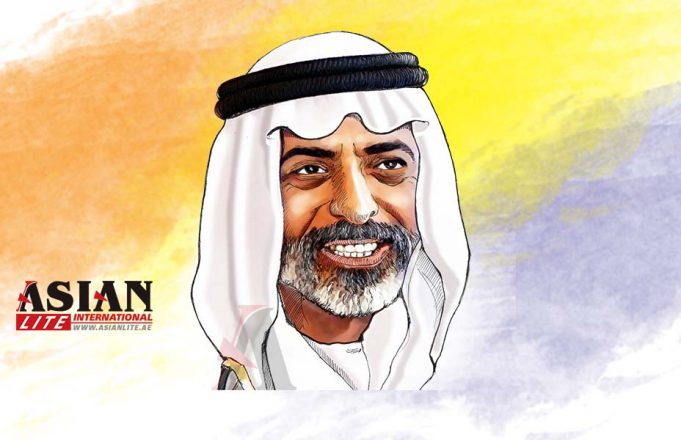 To be in his presence is in itself an elevating experience. Considering his eminence you would think it would be intimidating to be in conversation with him. On the contrary his gentleness and his graciousness and patience, all hallmarks of exceptional people, disarms you so completely. Anyone who has had the opportunity to interact with His Excellency Sheikh Nahayan bin Mabarak Al Nahayan the Minister of Tolerance will confirm that it is a very special experience … writes Bikram Vohra

Sheikh Nahyan brings to his work a multi-faceted approach. One that is bed-rocked in results. He is open to all shades of opinion and ready to listen to new ideas. His concept of success is predicated to promoting the value system as envisioned by President His Highness Sheikh Khalifa bib Zayed Al Nahyan and Vice President and Prime Minister of the UAE and Ruler of Dubai, His Highness Sheikh Mohammed Bin Rashid Al Maktoum. The leaders of the UAE always believe in a simple message: “Tolerance and the UAE are two sides of one coin, and a key value of its people, and a cornerstone of the country’s future development.”

Dedicated to giving tolerance the added dimensions of acceptance and understanding Sheikh Nahyan has already made major strides in giving the country a pivotal global position in generating peace and goodwill in tangible fashion.
Recently, the happy impact was also felt in the halls of justice where he launched the Dubai Courts Tolerance Charter in a unique bid to adopt legislation ‘that would ensure justice, respect and the acceptance of others while rejecting and criminalising intolerance.’
Sheikh Nahyan’s passion for building mutual trust and respect and creating an atmosphere of togetherness is best expressed in his statement: we wish to make Dubai one of the best cities in the world in terms of justice, independence and transparency and providing accessible judicial services.

On his watch the Ministry has been visibly active and the impact at home is visible while on the international stage there is a very positive response to the initiative. Not many countries have such governmental edifices dedicated to promoting tolerance and happiness, for example.

Sheikh Nahyan also holds great store by education and when he held that portfolio he brought to it a special zeal and intent in creating facilities for all round development. That is why sport per se has a very important position in his scheme of things and why it is nice to see him make personal appearances at sporting events, both big and small.

If anything stands out about this exceptional individual it is his ability to encourage and give of his time so liberally. With a diary that must be chockful and a long line of those waiting to invite him to their events and functions it is surprising if he has ant time for himself. A normal day could see him cover a dozen multi-faceted events ranging from exhibitions to launches to performances of the arts. Conversation around him are often spiked by the query; where does he get his stamina from seeing as how he never seems to flag.

Surender Singh Kandhari of Al Dobowi Tyres who has worked with the minister on many initiatives puts it very well: HH Sheikh Nahayan is a very warm affectionate caring person. He personally met everybody, enquired about them and also served people with his own hands. He is a marvellous person and once you have established a rapport with him it is something you treasure. One has to learn a lot from him, his natural humility and easy access, his wide spectrum of understanding and knowledge and his love and respect for others makes for a compelling personality. He is easily approachable and gives you an ear to listen to all your suggestions and proposals with great intent. One can say he is a very busy man who paradoxically has time for everybody.

“I sometimes wonder how he manages his time. He is everywhere all the time and supports scores of projects, activities and his good nature makes him a very hospitable person. It is no surprise he has many friends, well-wishers and supporters. He makes you feel very important and has a great memory. He does not forget people.”

A man for many seasons Sheikh Nahyan has also held the post of Chairman of CERT (Centre of Excellence for Applied Research and Training), the commercial arm of the Higher Colleges of Technology. For several years, Sheikh Nahyan has been the sponsor of the Emirates Natural History Group with chapters in Abu Dhabi and Al Ain. It can truly be said that his imprimatur on education per se in the country is durable and deep and his many concepts and ideas commissioned during his tenure as Minister of Education have reached fruition in a nation the prizes knowledge. His Excellency was also Chancellor of United Arab Emirates University from 1983 to 2013; Chancellor of Higher Colleges of Technology from 1988 to 2013; and President of Zayed University from 1998 to 2013. These are today flourishing as groves of academe.

His current priority is to further enhance the comfort zone for the 200 nationalities which comprise the population of the UAE. To that effect he says; “the country is promoting communication, understanding and peaceful coexistence between communities while maintaining its original traditions, to establish its prominent stature as a centre of tolerance and cultural pluralism that embraces over 200 nationalities, who live together peacefully.”