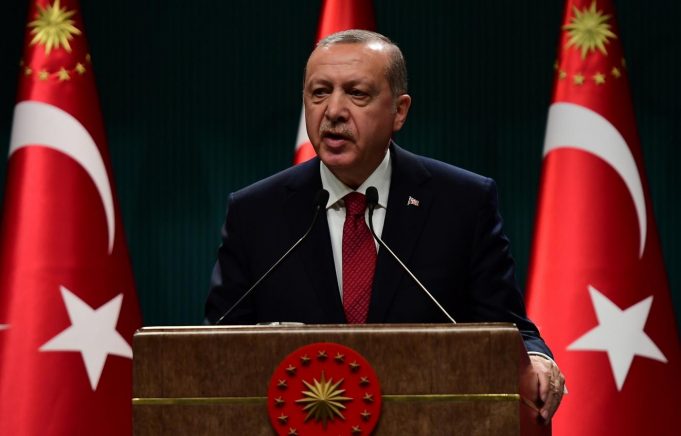 Turkey’s long-standing leader Recep Tayyip Erdogan won a new five-year term after securing outright victory in the country’s presidential and parliamentary elections, tightening his grip on the nation he has ruled for 15 years…reports Asian Lite News.

Turkey’s Supreme Election Council (YSK) on Monday announced that with 99.6 per cent of ballots counted, Erdogan had secured 52.5 per cent of the vote in the Sunday election, which would eliminate the need for a runoff, state-run news agency Anadolu reported.

Voter turnout was high at almost 87 per cent, according to election officials.

His top rival, Muharrem Ince, a lawmaker from the secular Republican People’s Party (CHP), lagged behind at 30.6 per cent. He accepted the result on the basis of poll figures but said that everything about the vote was “unfair”.

Under the new system, the office of Prime Minister is abolished, Parliament’s powers curtailed and the President is accorded wide-ranging executive authority.

Delivering a traditional balcony speech from the headquarters of his AKP early on Monday morning, Erdogan vowed to roll up his sleeves to build a bigger and stronger Turkey.

“The winners of the June 24 elections are Turkey, the Turkish nation, sufferers of our region and all oppressed (people) in the world,” he said, according to state media.

“Turkey has decided to take the side of growth, development, investment, enrichment and a reputable, honourable and influential country in all areas in the world,” he said.

The leader said his government would confront terror groups more decisively. “We will increase our country’s international reputation,” he was quoted as saying by Hurriyet Daily News.

“Immediately after the oath-taking ceremony, we will start implementing our programme by identifying our bureaucrats,” Erdogan said, vowing to work day and night as “we have no single moment to lose”.

Turkish Prime Minister Binali Yildirim also addressed his supporters in Ankara. “It is a festival day today. It is Turkey’s day. It is a day that 81 million people won and there is no loser.”

Eight political parties were contesting for the parliamentary polls while six candidates, including Erdogan, were in the fray for the presidential election.

Palestinian President Mahmoud Abbas congratulated the Turkish leader on “the success of the Turkish democratic process and his victory in the presidential elections”.

Under the new Constitution, Erdogan could stand for a third term when his second finishes in 2023, meaning he could potentially hold power until 2028.