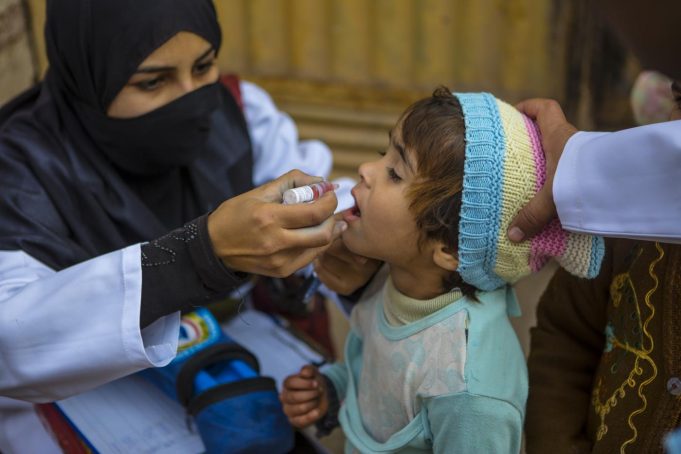 Management of the UAE-funded Project to Assist Pakistan, UAE PAP, unveiled today the results of the UAE’s polio vaccination campaign in Pakistan that started in 2014 until the end of February 2018.

As many as 281,374,70 million anti-polio vaccines were provided to more than 57 million children less than five-year-old.

Abdullah Khalifah Al Gafili, the Project Director, said that the drive commenced in 2014 under the umbrella of the worldwide campaign launched by His Highness Sheikh Mohamed bin Zayed Al Nahyan, Crown Prince of Abu Dhabi and Deputy Supreme Commander of the UAE Armed Forces, to eradicate polio.

“Since day one, the drive won a very prominent position in Pakistan as we managed to get to very dangerous and impassable areas despite all the security concerns, difficult terrain and harsh climatic conditions,” he said.

“In 2018 we expanded the campaign’s geographical coverage to 83 Pakistani areas in total including 25 areas in Khyber Pakhtunkhwa province, 13 areas in the Federally Administered Tribal Areas, FATA, and 33 areas in Balochistan province and 12 areas in Sindh province,” he added.

Some 96 thousand doctors, observers, members of the vaccination teams and 25 thousand of the security, administration and coordination teams participated in the field works of the drive, he said.

This drive echoes the leading role played by UAE to assist poor countries worldwide and support the international efforts and UN’s programmes aimed at providing preventive healthcare services to underprivileged people and children against diseases, epidemics, crises and disasters.

The UAE’s international anti-polio drive managed to form successful partnerships with a number of the UN’s organisations, such as the UNICEF and World Health Organisation, WHO, for increasing coordination and sharing information, data and daily indicators of the spread of the virus for improving the anti-polio campaigns.

“Thus, we increased the range of our geographical coverage to include more remote and impassable areas and increased the number of children who benefited from our services worldwide,” he said.

“For example, through our partnership with Bill & Melinda Gates Foundation, as part of the prize-giving night of the Mohamed bin Zayed Global Health Awards, we honoured some members of the vaccination teams who spent most of their lives in fighting polio,” he said.