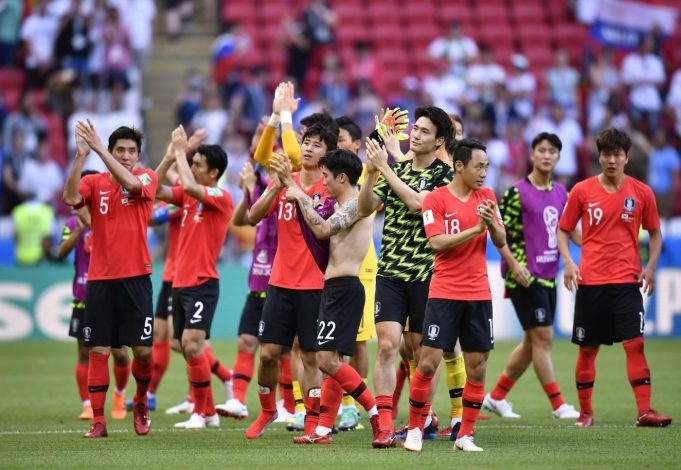 The traditional powers like Germany, Brazil, Argentina, Spain, France, Portugal and England have struggled against teams generally regarded as way down the pecking order of world football.

All the Asian and African teams have been extremely well organised in defence and midfield, which has made them difficult to score against. But almost all of them have struggled with the final pass in the attacking third.

South Korea wrote yet another glorious chapter in the history of Asian football by scripting a stunning 2-0 win over Germany, which sent the defending champions crashing out of the World Cup.

The Koreans had started their campaign poorly, losing 0-1 to Sweden. The tight knit Korean defence and midfield gave a good account of themselves although they struggled with the aerial balls against the tall, physically strong Swedes.

But the well-organised Sweden defence coupled with the Europeans’ physical advantage proved too much for them. The Koreans also resorted to frequent use of long balls, which was not exactly the best strategy to use against Sweden.

South Korea continued to struggle in the next match, going down 1-2 to Mexico. Until that point, the Koreans were the most underwhelming among the Asian teams, along with Saudi Arabia.

But they were a completely changed unit in the contest against Germany. While the Korean defenders held the highly rated German forwards at bay, Kim Young-gwon and Son Heung-min scored in second half stoppage time to complete a memorable win.

South Korea were not the only underdog team to stun higher rated opponents. Switzerland punished struggling Brazil by holding the five-time world champions to a 1-1 draw.

Brazil’s traditional rivals Argentina were held to an identical scoreline by tiny but impressive Iceland in their campaign opener. They were subsequently thrashed 0-3 by Croatia, which left them needing a win over Nigeria in their last group match.

The Nigerian forwardline had seemed somewhat blunt in their first two matches, but for two brilliant individual goals by striker Ahmed Musa which handed them a 2-0 win over Iceland.

They decided to adopt an aggressive strategy against Argentina, leaving occasional spaces in their defence which Lionel Messi exploited when he brilliantly controlled an Ever Banega cross to put the South Americans ahead.

Following Moses’ equaliser, Argentine fans spent the rest of the match with rising anxiety before Marcus Rojo scored the winning goal right at the end.

Meanwhile in Group B, both Spain and Portugal were given a hard time by Iran and Morocco. The group had started in explosive fashion when Cristiano Ronaldo smashed a hat-trick to help Portugal to hold Spain at 3-3.

In their next match, Portugal were given a tough fight by a spirited Morocco. A fourth minute goal by Ronaldo was the only difference between the two teams as Morocco dominated the second half.

Right winger Noureddine Amrabat was at the heart of most Morocco attacks, causing all sorts of problems for the Portugal defence. But the lack of a quality centre-forward hurt Morocco as Portugal clinched a narrow win.

Iran were also impressive against Spain and only a lucky goal by striker Diego Costa gave the Europeans a 1-0 victory. But for the rest of the match, the 2010 champions struggled to breakdown the stubborn Iranian defence.

Even Tunisia almost snatched a point from England. The north Africans gave England a tough time. The English line-up, studded with Premier League stars, was effectively blunted by the Tunisia defence.

The Tunisian midfield also did well, consistently winning the 50-50 balls and doing well when in possession. However, they fell short in the final third due to the poor quality of the final pass.

Despite their shortcomings upfront, Tunisia seemed good enough to come away with a point. It was the silly conceding of a corner in second half injury time and some poor marking of England’s star striker Harry Kane at the far post that kept them from what would have been a well-deserved draw.

Japan’s teamwork and collective discipline has been the most impressive among the Asian nations. They became the first Asian nation to defeat South American opposition at a World Cup when they shocked star-studded Colombia 2-1 in their first group match.

However, despite all the improvements and promising performances, the rest of the world still has a long way to go before they can hope to match the superpowers from Europe and South AMerica.

This year, Japan is the only team from Asia and Africa combined to qualify for the second round. The fact that no A frican teams managed to survive the group stage is something of a shock. This is the second time in the history of the tournament that no African team will feature in the round of 16. The first time was way back in 1986, which was the first edition to feature the round of 16.

For Asia, this is something of an improvement from 2014, when all the teams from the world’s largest and most populous continent finished at the bottom of their respective groups, with a combined total of three points.

All this is far removed from the heady performances of the 2002 World Cup, when South Korea became the first Asian team to reach the semi-finals — slaying giants like Italy and Spain along the way — while Senegal became the second from Africa to enter the quarter-finals since Cameroon in 1990.

This is despite the fact that South Korea and Japan have some of the best infrastructure while only a few countries can match the financial ability of the petro-dollar rich Gulf countries.

One of the ways in which Asian nations are trying to bridge the gap is by bringing in coaches from Europe and South America.

The domestic leagues of Japan and China have attracted some top talent, veteran FC Barcelona star Andres Iniesta, who recently joined Vissel Kobe, being the latest.

However, merely bringing in star players of signing big name coaches for the top level clubs are not enough. Unless coaching standards at the school or village levels improve, Asian players will struggle to match the technical and tactical ability of their European and South American counterparts.

With Qatar hosting the World Cup in 2022 and FIFA set to increase Asia’s quota at the game’s showpiece event to eight in 2026, better days are in store for Asian football.

Until then, lets hope Japan continues to fly high in Russia.