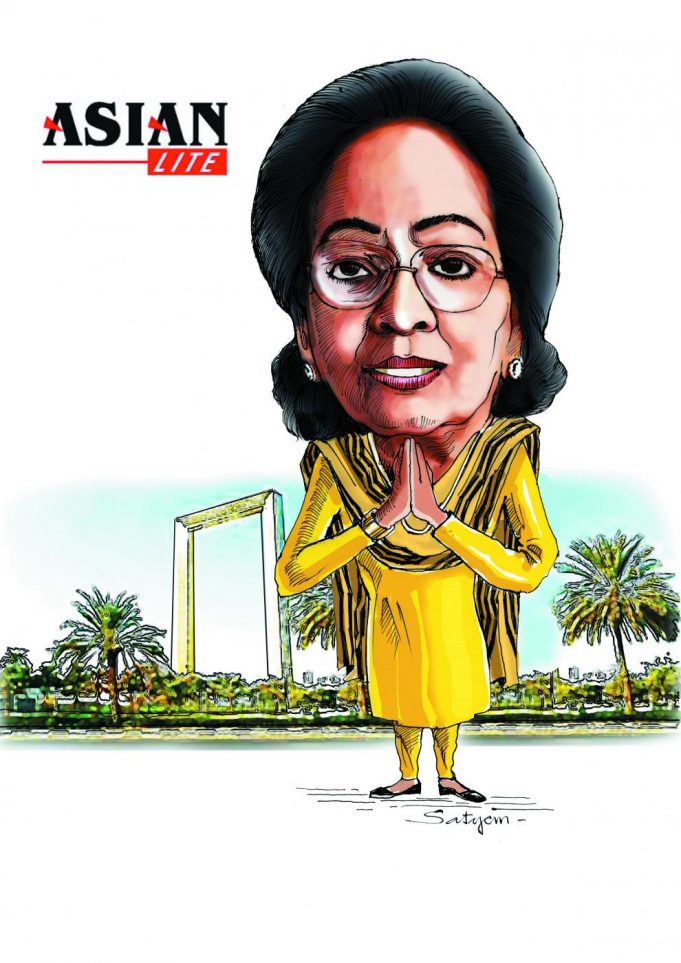 I am sitting with the lady herself on the night she is honoured with a lifetime achievement award. And with good cause. Omana Menon is the ‘mother’ of over 2000 children. That is no mean number. She has nursed their adoption from the first meeting and first official document to the final approval and made couples happy all over the world. Bikram Vohra meets Omana Menon, Asian Lite’s 2018 Asian Diaspora Award Winner

She is truly a woman for all seasons but today we are only talking about the summer of her contentment. It all began in 1981 when Omana became active in this endeavor and acted as a catalyst in getting a baby adopted for a couple who were very keen but were finding it difficult to navigate the complex and often frustrating process that marks the joining of child and parents. The sense of satisfaction derived from witnessing the sheer joy and pleasure on both sides and then monitoring and mentoring the togetherness was a whole new and elevating experience. She then joined CARA (India’s Central Adoption Resource Agency) and has worked with them gently shepherding children to warm and loving homes and being the adhesive in creating whole families.

She is the first to accept that it is no easy task and between the paperwork and the process which can be stressful for both the couple and the ‘midwife’ and often suspenseful the result is worth it. Just to witness the joy on the faces of a united family is worth all the effort.

Omana is honest about the flip side of the coin. It is heartbreaking when one has to break the news to a couple that the clearance is not forthcoming. There can be many reasons for it and it may not be any fault of the applicants for their being turned down. These could be financial, psychological, some hitch in the approach of the prospective parents, even a doubt that they do not have the staying power.

What is denied by reasons of health or anatomy, if it can be redressed and realised by legally adopting a child and bringing it up as one’s own, the pleasure of fulfilment is considerably greater than the normal arrival of a progeny.

Omana’s own words have a ring of honest romance about them and underscore the joyous nature of the bonding: “ From the abyss of despair and denial, the mother with her hands aching to hold her child, rises with ecstasy to the zenith of life’s most glorious attainment of motherhood. It has been proven beyond doubt that the maternal love for an adopted child is no way different or less than that for one’s biological child. In her letter left before dying written to her adopted daughter, in a true life story chronicled and filmed, a mother tells her child “I did not carry you in my womb but you were always and every moment in my heart”.

The happiness and sense of fulfilment of the adoptive parents are one side of the glorious coin and the other side is of equal lustre, for while the home gets a child, the child gets a home. Perhaps this would be the only give and take situation where both parties are givers and equally so, both are takers.

It is not by any means an easy task. Years go by, before the childless couple gathers courage to acknowledge that for medical or biological reasons they will not be able to have a child of their own. That takes courage and conviction and arrows straight into their psyche. When they have mentally and psychologically overcome that barrier they have to deal with the pressure from relatives and that comes often with prejudice. Caste, religion, even colour and gender are thrown in them ix. We humans carry our prejudices with us. Perhaps a few months more will be spent between them discussing the advisability of adopting a child. More often that not it is the wife who is more keen to adopt the child, but she also is the one who is more apprehensive.

Then comes that moment when they have listed their doubts and are ready to explore the option. Husband and wife are not accusatory they are on the same page.

Omana first looks for this compatibility. “ It is at this phase that the couple usually contacts me for my guidance and advice, and I invite them to my home for an informal chat,” she says.

These meetings always turn out to be of consequential importance. When the couple come together to meet me, in a few cases, I have noticed that while the wife is very keen to adopt a child, the husband is only agreeing as a matter of appeasement. Or sometimes, it is the other way, but either way such a situation cannot warrant any further steps, until and unless both husband and wife are equally intense and definite in their desire and decision to adopt a child. But in a vast majority (perhaps over 95%) of the 600 cases I have handled during the course of the last 15 years, both husband and wife have been between them in total accordance in all matters concerning the adoption. Their fears are different from what are expected from natural parents, because they are  having a child which is biologically not their own. “Do we need to be extra careful, in handling the child will we hurt the child by not being proper”, these and similar apprehensions crop up during the sessions of my discussions with the prospective parents to whom I give my assurance borne out of first-hand knowledge that there is no difference whatsoever in the needs and traits between a biological child and an adopted one.

“Should we, or when should we inform the child that it is an adopted one”, this is a question often asked by the adoptive parents, not only during the initial sessions, but even after the child is adopted and has been with them for couple of years. This is indeed a difficult question, as while some parents would like to hold on to the secret for fear of losing the child’s love and loyalty, others genuinely are scared that the child will be heart-broken when he or she suddenly becomes aware that the father and mother are not quite one’s own, and somewhere there is another person who is really the mother, and who had abandoned the child.

There are many case studies to vouch that, fortunately and invariably, the parents in right time without any repercussions have been able to convey to the child, when he (or she) has reached a reasonable and reasoning age to understand, that he (or she) was an adopted child. Meanwhile, the child has received abundant love and care and so is not insecure in that score and accepts the ‘news’ wholeheartedly without any remorse.

In India there is an extra layer of protection in the process and requires a great deal of investigation and checking before the green signal can be given.

The statutory authority for the adoption of a child is the Ministry of Social Welfare of the Government of India who has duly authorised me to formally meet the prospective parents and to make my recommendations by a documented Home Study Report. To support my efforts, the Ministry has also given my coordinates to adoption agencies and orphanages throughout India. When prospective parents approach adoption agencies or orphanages in India, those institutions direct the applicants to me, or in a few cases, either from newspaper reports or learning from others who have been successful.”

But in the end, when all is said and done, there comes a day when the child is the arms of his new parents. That magical moment makes it all worthwhile.

Please send your comments to newsroomdubai@asianlite.com