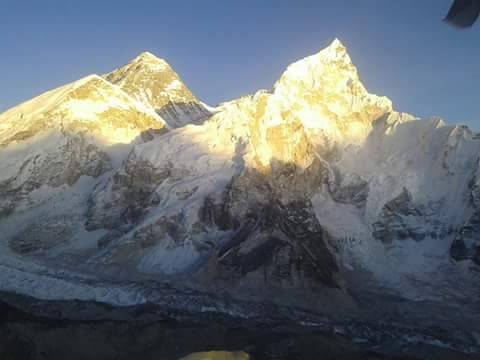 Sherpa first reached the top of the mountain in the evening of May 7 as a member of a rope-fixing team, and then performed the feat again on the morning of May 11….reports Asian Lite News

Mingma Tenji Sherpa, a Nepali mountain guide, has created a world record by scaling Mt. Everest, the world’s highest peak, twice in the shortest span of time in a season, organisers said on Thursday.

Sherpa first reached the top of the mountain in the evening of May 7 as a member of a rope-fixing team, and then performed the feat again on the morning of May 11, while guiding an expedition team consisting of Bahraini Prince Sheikh Mohammed Hamad Mohammed Al Khalifa, according to the company which organised both expeditions.

“He climbed Mt. Everest twice in the gap of just four days which is a world record,” Mingma Sherpa, chairperson of the Seven Summit Treks, told Xinhua news agency.

“He took nearly 86 hours to do double ascents.”

Previously, Indian mountaineer Anshu Jamsenpa had held the record for fastest dual ascents on Everest, doing so in 118 hours and 15 minutes in 2017.

She however, still holds the record for fastest dual ascent on the peak by a woman.

Mingma Tenji Sherpa has been working as a mountain guide with the Seven Summit Treks.

Other climbers have set their own records on the 8848.86-meter-high Mt. Everest this season from the Nepali side, including Kami Rita Sherpa, a Nepali mountain guide who broke his own record by climbing the mountain for the 25th time on May 8, and three Nepali Sherpa sisters from the same family, who reached the top on May 12.

ALSO READ: ‘Everest is not a tourist mountain’