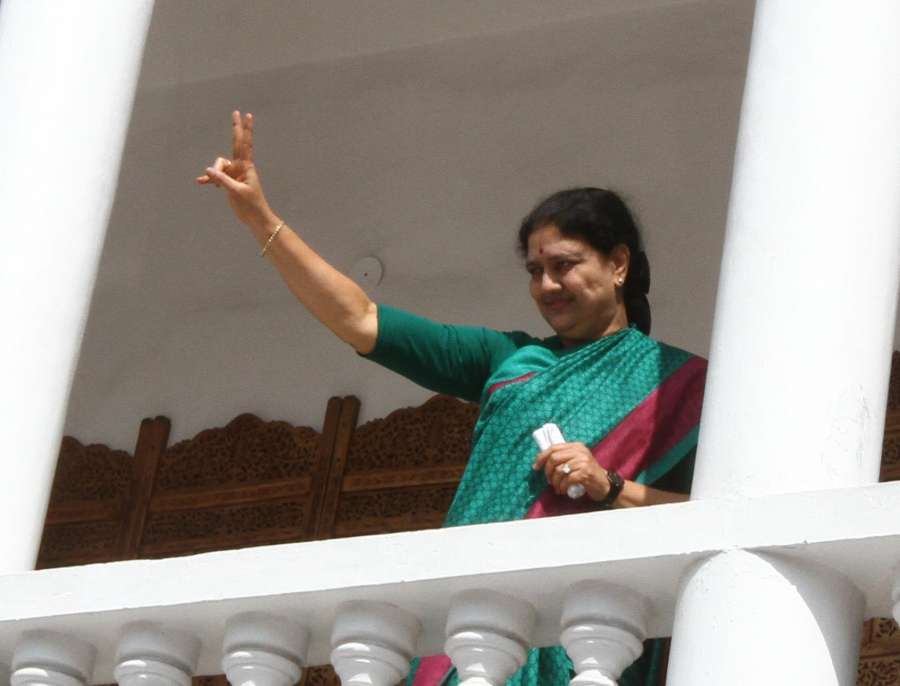 The close associate of former Chief Minister late J. Jayalalithaa and the former General secretary of AIADMK, V.K. Sasikala popularly known as “Chinnamma” among the AIADMK cadres has reportedly hinted that she would return to active politics.

She in a telephonic call to a party worker on Saturday hinted that she may come back to politics and that she will take over the AIADMK.

In the telephonic call she is speaking to a party worker that she will not allow AIADMK to fall apart and that after Covid-19 pandemic subsides she would come back to active politics.

Sasikala, before the assembly elections, had dramatically announced her withdrawal from politics after entering the state of Tamil Nadu with a convoy of 1,000 vehicles. She was released from the Parappana Agrahara Central prison in Bangalore after serving a four-year jail term in case related to disproportionate wealth case.

Sasikala’s nephew and Chairman of Amma Makkal Munnetra Kazhagam (AMMK), TTV Dhinakaran was not available for comment but his office when contacted by IANS said, “Sasikala Madam has spoken to some of the party members that she will be coming back to Tamil Nadu politics”.

While Edappadi had emerged stronger in the party owing to his huge victory in his home constituency Edappadi with a margin of 93,802 votes in the 2021 assembly elections and was instrumental in the victories of AIADMK led front in ten of the eleven seats in Salem district, the home district of Edappadi K Palaniswami(EPS).

In the Southern districts of Tamil Nadu which was once the stronghold of AIADMK, the party faced a drubbing and in the Theni district, the party could win only Bodinayknar seat of O Panneerselvam while the party lost in other seats. This was a major setback for the AIADMK as the predominant “Thevar” community was always aligned with the AIADMK ever since Sasikala had emerged in AIADMK politics.

Sasikala, according to the sources in AMMK is inclined to take over the AIADMK and pose a threat to the ruling DMK dispensation and it has to be seen how far she will succeed in wriggling her way to the top in the new avatar of AIADMK in which Edappadi K Palaniswami has emerged stronger.

The AIADMK is now facing rough weather with its two most powerful leaders – Edappadi K Palaniswami (EPS) and Deputy Chief Minister O Panneerselvam (OPS) – engaged in a fight over political supremacy within the party.

OPS is a Thevar and a former loyalist of late Chief Minister J Jayalalithaa and her friend VK Sasikala. Incidentally, both Sasikala and OPS are from the Thevar community, considered as fighters and warriors among the various caste denominations of Tamil Nadu.

With Stalin emerging as a popular Chief Minister, the AIADMK has to settle the differences between its main leaders, Palaniswami and Panneerselvam. The theory doing the rounds in Tamil Nadu is that they have to be together or it could lead to the AIADMK getting marginalised in the days to come as a wounded Sasikala and TTV Dhinakaran are waiting in the wings to try and make a comeback in the party and to forge an alliance with OPS who is from the Thevar community as much as they are.

However, political observers are of the opinion that at present the minor rift between the two main leaders of the AIADMK has not yet reached a no comeback point. But if the rift widens and Sasikala and Dhinakaran try to make a comeback, it could lead to a major division where the EPS faction may use all the weapons in its armoury to block their entry. (with inputs from IANS report by Arun Lakshman)