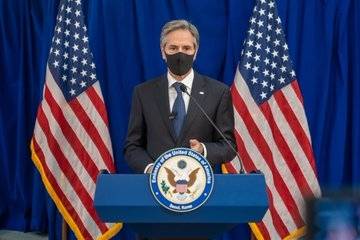 The top US diplomat stressed “Our purpose is not to contain China, to hold it back, to keep it down”….reports Asian Lite News

An increasingly confident China is acting “more aggressively abroad”, US Secretary of State Antony Blinken said in a televised interview.

“What we’ve witnessed over the last several years is China acting more repressively at home and more aggressively abroad. That is a fact,” dpa news agency quoted Blinken as saying in a CBS News interview broadcasted on Sunday.

Asked what he considered Beijing’s long-term goal, Blinken said: “I think that over time China believes that it can be and should be and will be the dominant country in the world.”

When queried about a potential military confrontation with China, the Secretary of State replied: “I think it’s profoundly against the interests of both China and the US to get to that point or even to head in that direction.”

The top US diplomat stressed “Our purpose is not to contain China, to hold it back, to keep it down”.

“It is to uphold this rules-based order that China is posing a challenge to. Anyone who poses a challenge to that order, we’re going to stand up and defend it,” Blinken continued.

Concern has been growing over China’s increasing assertiveness in the Indo-Pacific region, its growing tensions with Taiwan and human rights issues regarding the Muslim minority Uighurs in the western region of Xinjiang.
Also read:China’s new maritime law may escalate tensions in Indo-Pacific