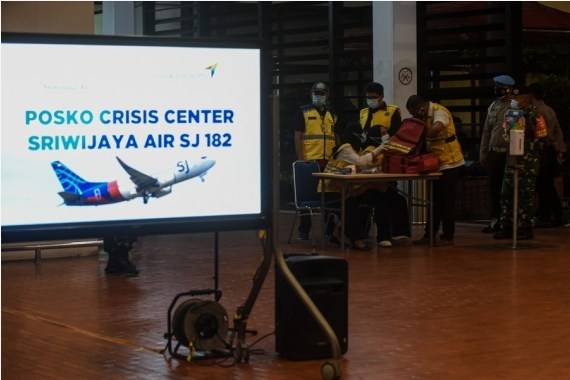 “We received three bags containing the debris of the plane and five bags of human body parts,” Operation Director of the National Search and Rescue Agency Rasman M.S. said.

All the eight bags were carried by the navy’s KRI Kurau ship, according to the director.

This has brought the total body parts discovered by the rescuers to seven, reports Xinhua news agency.

The Boeing 737-500 aircraft, flying from the capital Jakarta to Pontianak city in West Kalimantan province on Saturday afternoon, crashed into the Java Sea off the Seribu District in north of Jakarta, reports Xinhua news agency.

It was carrying 50 passengers, including 10 children and 12 crew members.

The body parts will be handed to the police’s DVI (disaster victims identification) unit for identification and the debris would be sent to the National Transport Safety Committee for analysis, according to the agency.

A total of 362 rescuers with 38 ships, some of them equipped with multi-beam echo-sounders and remotely operated vehicles (ROV) to detect objects underwater, were currently searching for the victims and the wreckage of the budget airline plane.

Earlier in the day, Indonesian military chief Hadi Tjahjanto said naval ship KRI Rigela equipped with a remote-operated vehicle, which arrived at the search location at 3 a.m., detected the signal possibly from the aircraft.

“Based on the results of monitoring, and according to the coordinates given from the last contact, it is strongly suspected that there was a signal from the plane,” he said.

President Joko Widodo on Sunday expressed his condolences to the families of the victims, saying at a press conference: “I am on behalf of the government and all the Indonesian people to express my deep condolences over this tragedy.”

The last plane crash in Indonesia took place in October 2018 when a Lion Air flight plunged into the sea about 12 minutes after take-off from Jakarta.

A total of 189 people died in that crash.

It was one of two crashes that led regulators to pull the Boeing 737 Max from service all across the world.

In December 2014, an AirAsia plane crashed into sea en route from Indonesia’s second biggest city Surabaya to Singapore, killing all 162 people aboard.