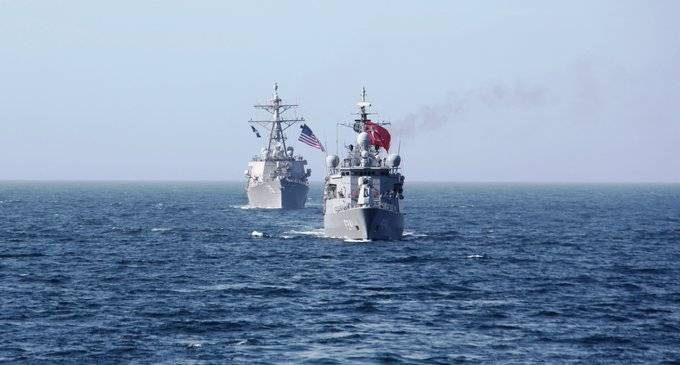 It gives Beijing the authority to instruct foreign vessels that “threaten the safety of Chinese internal or territorial waters” to leave and to exercise the “right of immediate pursuit,”…reports Asian Lite News

Kayleigh Madjar, writing in Taipei Times said that the move is creating fear of a “ticking time bomb” for conflict in the South China Sea (SCS).

The Standing Committee of the National People’s Congress in April amended China’s Maritime Traffic Safety Law that requires foreign vessels entering what it considers to be its territorial waters to notify Beijing.

It also gives Beijing the authority to instruct foreign vessels that “threaten the safety of Chinese internal or territorial waters” to leave and to exercise the “right of immediate pursuit,” said Madjar.

According to the UN Convention on the Law of the Sea (UNCLOS), territorial waters are defined as the 12 nautical miles (22.2km) of the sea extending from the terrestrial territory, with the “right of innocent passage” reserved for vessels moving through territorial waters in a manner that does not threaten the security of the coastal state.

The Chinese Maritime Safety Administration said in a statement that the new reporting requirement would apply to all submersibles, nuclear vessels and ships carrying radioactive or harmful substances, as well as any foreign vessels deemed to “endanger the maritime traffic safety of China.”

Reports should include the vessel’s name, call sign, current position, next port of call, estimated course and speed, nature of goods and loading capacity, it said.

Other nations are afraid that China’s exploitation of the law to expand the scope of “grey zone” conflict could become a ticking time bomb, said Su Tzu-Yun, Director of the Division of Defense Strategy and Resources at the Institute of National Defense and Strategic Research, reported Taipei Times.

Beijing considers its maritime jurisdiction to encompass more than just its coastal waters, Su said. This would include the 12 nautical miles of the sea surrounding the artificial reefs it has constructed in the South China Sea, giving Beijing an excuse to respond to freedom of navigation exercises carried out by other nations, he said.

Beijing claims almost all of the South China Sea as its sovereign territory, turning numerous obscure reefs and sandbars throughout the waterway into man-made artificial islands heavily fortified with missiles, runways and weapons systems.

China claims sovereignty over almost the entire South China Sea and has overlapping territorial claims with Brunei, Malaysia, the Philippines, Vietnam and Taiwan.

China’s territorial claims in the South China Sea and its efforts to advance into the Indian Ocean are seen to have challenged the established rules-based system. (ANI)

ALSO READ: UK reaches out to Russia, China to hold leverage with Taliban