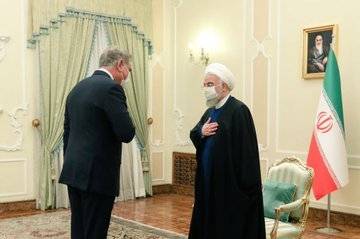 Rouhani urged for the promotion of Tehran-Islamabad ties in trade, energy and border markets, adding it is necessary for both sides to implement the signed agreements to further cooperation..,reports Asian Lite News

Iranian President Hassan Rouhani has called for the enhancement of security and economic cooperation between Tehran and Islamabad.

“Security is a common concern for the two countries, and it is essential to boost cooperation in this regard,” Rouhani said in a meeting on Wednesday with visiting Pakistani Foreign Minister Shah Mahmood Qureshi.

He also stressed the need to promote security along the Iran-Pakistan borders, Xinhua news agency reported.

The Iranian President urged for the promotion of Tehran-Islamabad ties in trade, energy and border markets, adding it is necessary for both sides to implement the signed agreements to further cooperation.

Also, Iran stands ready to work with Pakistan towards the peace process in Afghanistan, he noted.

The Pakistani Foreign Minister, for his part, hailed the relations between the two countries as “cordial” and called for the promotion of all-out ties.

Iran and Pakistan will hopefully witness a new chapter in their ties, especially in the fields of trade and economy, said Qureshi.

Also read:India needs to re-bond with Russia and Iran

He also backed the 2015 Iranian nuclear deal, also known as the Joint Comprehensive Plan of Action (JCPOA), as a “big diplomatic achievement”.

“We are very happy that the JCPOA has been preserved with the efforts of Iran, and today we are witnessing negotiations again to revive this multilateral agreement,” the Pakistani diplomat said.

The two countries also signed a memorandum of understanding on Wednesday to establish joint border markets in efforts to strengthen cross-border economic exchanges.

The agreement, which was signed by Iranian Foreign Minister Mohammad Javad Zarif and Qureshi, aims to promote economic relations between the two countries and the welfare of border residents.

The border markets will be administrated based on the agreements and protocols between the two sides.

Qureshi arrived in Tehran on Tuesday for a three-day official visit.

Earlier on Wednesday, the third joint border crossing between the two countries was opened.