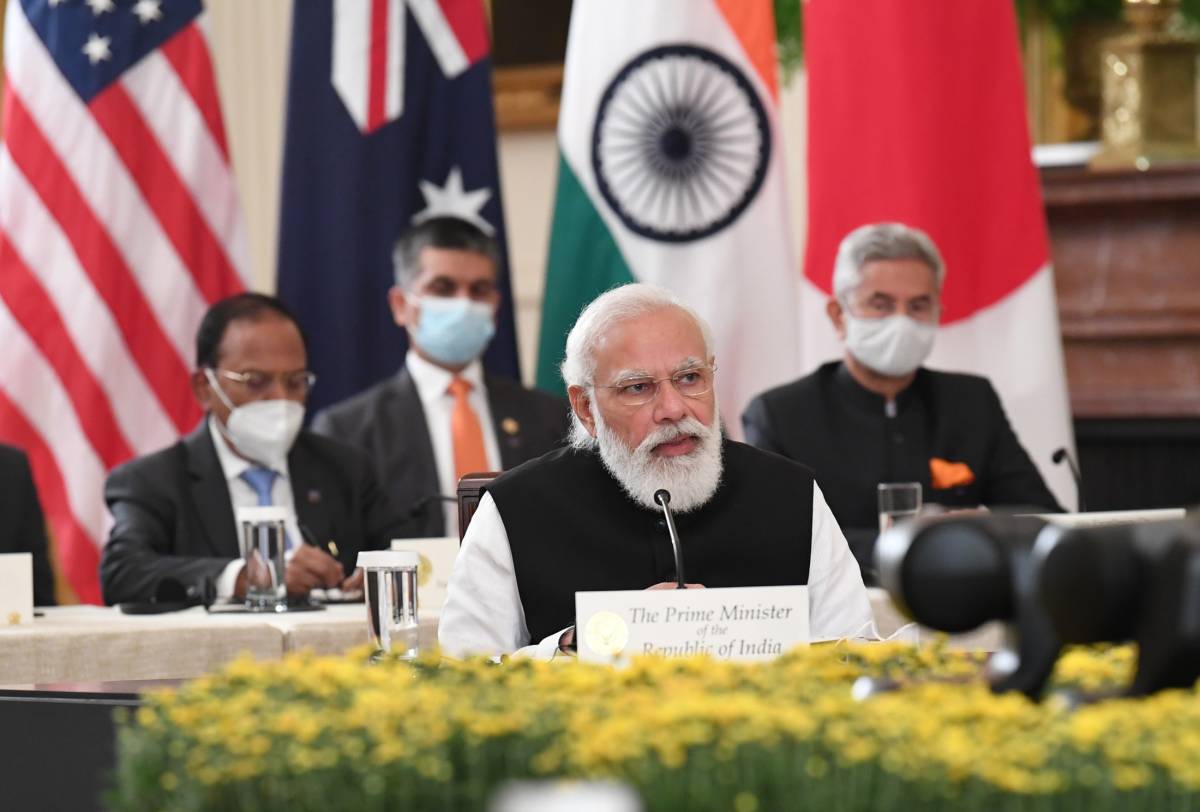 Quad’s informal arrangement will allow other non-Quad nations to join and support the norms and values of democracy and international law in the future. The countries that have been direct victims of China’s aggressiveness will join the Quad to deter China in the future, writes Asanga Abeyagoonasekera

Alliance gives new meaning to political boundaries on physical maps empowering coalitions with political preferences to work together. President Biden does “not seek a new Cold War”, clearly expressing at the UNGA and many other leaders are with Biden, including Indian Prime Minister Modi, where the world divided into two rigid blocks will only limit progress and prosperity to many nations. In reality, Cold War structures will resurrect when the rules-based order is threatened, and robust partnerships are required to maintain the security balance.

President Biden established a more structured alliance, the AUKUS, a week before the first-ever in-person Quad Summit in Washington DC on September 24. AUKUS, the security alliance, will enhance the capability of the US, the UK and Australia on deterrence, an expansion of underwater warfare capabilities of the nuclear-powered submarine fleet to Australia for extended patrols. With more military capacity in Indo-Pacific and substantial naval presence, the like-minded nations in the new security alliance will deter China’s aggressiveness in the South China Sea and the surrounding waters. Many like-minded nations with democratic values who subscribe to Free and Open Indo-pacific (FOIP) norms will be part of the AUKUS security structure in the future. While the security alliances are usually heavily structured, the primary informal structure with a non-militaristic space will be the Quad which is more informal. Michael J. Green from the Center for Strategic and International Studies (CSIS) argues, “It’s like a dimmer, not an off-on switche It’s a flexible tool, including who joins. It’s flexible for a Korea or a New Zealand or the UK. If they decide they’re upset with China, they can send a frigate to the next exercise.” The flexibility of the Quad made it easier for nations like Singapore to join military exercises a few years ago with the Quad and many other nations to follow bilateral or trilateral naval exercises to enhance the value of a critical Quad goal, to maintain a free and open Indo Pacific (FOIP).

In the Western diplomatic toolkit, Quad is at the forefront due to the assertiveness of China in the Indo-Pacific from military expansion and stealth economic takeover, ‘strategic trap’ to shackle nations under Chinese ‘BRI’ orbit. “The Quad has come together due to china’s assertive behaviour and economic dependence of some countries”, explains ORF scholar Druva Jaishankar. The Quad is a non-security arrangement due to India’s appeal to leave security out of its core agenda. Focused more on securing supply-chain security, semiconductors and vaccine diplomacy was the primary focus. China was not mentioned during the summit due to the Biden administration’s idea of Quad to project a positive vision towards a vaccine, climate change, critical technologies and not a grouping to contain China.

However, Raja C. Mohan from ISAS Singapore observed, “China’s peaceful rise has not been peaceful, a concern to many nations… having bitten once [by China] people are finding alternatives.” China’s assertiveness with military expanse, the concern of human rights and coercive economic practices with stealth takeover of strategic assets promoting alternative governance structures with more militaristic regimes such as in Sri Lanka would alter the core agenda of the Quad. India, which preferred a non-military configuration for the Quad, would perhaps be forced to bring insecurity to the Quad agenda in the future to defend and protect the regional balance due to China in its immediate neighbourhood.

Quad, initiated in post-Asian Tsunami in 2004, has been at the forefront during the pandemic to “play the role of a force for global good”. Explains Prime Minister Modi, “I’m confident that our cooperation under Quad will ensure prosperity and peace in the Indo-Pacific and in the world.”

Quad’s informal arrangement will allow other non-Quad nations to join and support the norms and values of democracy and international law in the future. The countries that have been direct victims of China’s aggressiveness will join the Quad to deter China in the future. The informal structure of Quad to protect and bring democratic nations together, to give protection to nations that have become victims of China’s “debt trap”, such as Sri Lanka. It will also be a balancing counterweight to Chinese expansion. The “strategic trap” is visible in Sri Lanka from its long term 99 years leased out strategic infrastructure. The Hambanthota port and Colombo Port City were the best examples of strategic expanse. While accepting and expanding the Chinese loans, Sri Lanka rejected substantial grants such as the US MCC. Recently at Carnegie Endowment, the Sri Lankan Foreign secretary explained the rejection of the US MCC grant of $480m by the government was due to “democracy and people’s power” that scrapped the project, defending that there was no China hand behind. The foreign secretary has forgotten the concocted Presidential expert commission report projecting a national security threat.

Chinese sphere of influence has now enlarged into Sri Lanka’s democratic space, where the Sri Lankan regime defends Chinese human rights in Xinjiang, clear signs of reciprocal arrangements to receive assistance from China to defend the grave human rights concerns in Sri Lanka raised by the UN High Commissioner at the 48th UNHRC session a few weeks ago. The recent expression of Foreign Secretary Jayanath Colombage was “we wish to remain neutral in our foreign policy”, which contravenes with the Chinese bandwagoning foreign policy posture taken by the same regime. Colombage further explained that Chinese warship arrivals are far less than India and Japanese warship arrivals to Sri Lanka, where 563 warships have visited since 2009ehinting a less significance of Chinese presence and interest from the volume of warship arrivals. Unfortunately, the ill-logical view does not capture the broader strategic danger to the Island nation and its neighbour India.

India will have two concerns with Chinese aggression and the strategic takeover of its neighbouring nations. First, to strengthen its external alliance structure, such as from Quad to bring in nations like Sri Lanka towards the norms and values of the international system rather than allowing drift from a Quasi-democracy to military control autocratic regime. This drift towards China will pose a direct threat to India’s security. While economic practices and standards are also part of Quad dialogue, supply chain security shows groups intention to work together in the economic arena where China’s place in the world economy would limit how far the Quad could achieve success in bringing standards to economic practices. Biden administration’s focus on the B3W (Build Back Better World) initiative will complement the economic infrastructure standards and supply chain security in the coming years.

Biden administration will focus more on Quad and the G-7, the two core organizing bodies that will centre on the global international system to achieve tangible results. India has a strong position and voice in both of these platforms than any South Asian nation. As mentioned by PM Modi, India is a “natural ally for the G7 countries in the fight againstauthoritarianism, terrorism and violent extremism, disinformation, and economic coercion, among other threats”.

Second, to partner and support security alliances, a more formal structure such as AUKUS will be of India’s interest since the mini-lateral compliments India’s vision towards achieving a rules-based Indo-Pacific. ORF scholar Rajeswari Pillai Rajagopalan aptly capture “AUKUS is an important development because it signifies the capability augmentation of one of India’s closest strategic partners, with whom it has just started a 2+2 ministerial dialogue. A strong and capable Australia is in India’s interests, that of the Quad and the broader Indo-Pacific region”

.These mini-lateral platforms will crisscross the Indian Ocean, where Sri Lanka, an important maritime nation located geo-strategically in the Indian Ocean, will be a crucial maritime partner to consider, unfortunately in the present context drifting towards Chinese orbit. Nations like Sri Lanka are essential due to their open access to the Indian ocean, where naval exercises and maritime security will be primary drivers for sustaining the mini lateral military arrangements. Sri Lanka’s security trilateral signed by the Gotabaya Rajapaksa regime with India and Maldives is a mini lateral in the right direction and will benefit Sri Lanka. India would require a two-pronged strategy to its northern borders and its South, the Indian Ocean. India, the only nation among the Quad nations that share a physical geographical border with China, is more vulnerable than the other Quad partners for confrontation, just like in the past. India’s challenges from its western flank, from Af-Pak, will grow with the Chinese footprint expanding in Afghanistan. From India’s South, the security balance of the Indian Ocean will be of primary interest where Sri Lanka, Maldives and other literals cannot be ignored.

The efforts of mini lateral democratic alliances such as Quad should focus more on targeted nations like Sri Lanka by the Chinese “debt and strategic trap”. Sri Lankan regime seeping away from democratic norms to a militarized rule has drifted from the Indo-Pacific configuration, a geographical flashpoint in India’s vicinity. The Quad should actively engage and seek commitment from nations like Sri Lanka, pulling towards the norms and values of a rules-based order. The country-specific strategic push from the Quad will assist Sri Lanka to recalibrate its foreign policy towards a more balanced and progressive path with international norms and values.

(Asanga Abeyagoonasekera is a geopolitical analyst, strategic advisor on security from Sri Lanka)