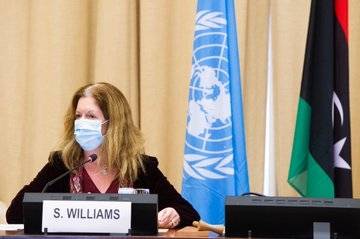 A senior UN official announced that the Libyan delegations reached an agreement on a recommended selection mechanism for a new temporary executive authority.

Stephanie Williams, Acting Special Representative of the UN Secretary-General and head of the UN Support Mission in Libya (UNSMIL), told a press conference here on Saturday that the selection mechanism will be provided for voting on Monday, reports Xinhua news agency.

The 18 members of the newly established Libyan Political Dialogue Forum’s Advisory Committee met here at UN’s Geneva headquarters from January 13-16, in an effort to overcome the deadlock on the mechanism for the selection mechanism for the country’s temporary executive authority.

“I believe this decision reached today is the best possible compromise, as this proposal respects the regional dimension, and it indeed encourages people to work across the divide and across regions, in order to strengthen understanding and to build unity in the country,” Williams said at the press conference.

She told reporters that on Monday, the UNSMIL will call upon the Libyan Political Dialogue members to vote on the proposed mechanism.

The vote will be conducted over a 24-hour period, and the result will be announced on Tuesday.

The UN official also stressed that after the forming of the temporary executive authority, general elections will be held in the country on December 24, and the executive authority will be replaced by a permanent, democratically elected government.

Libya’s eastern-based army and its UN-backed government fought for more than a year in and around the capital Tripoli before the conflicts ended last June.

At a meeting held last November in Tunisia, 75 representatives of the social and political spectrum of the Libyan society agreed to hold the general elections this year.

US disappointed over ‘Iran response’

US disappointed over ‘Iran response’