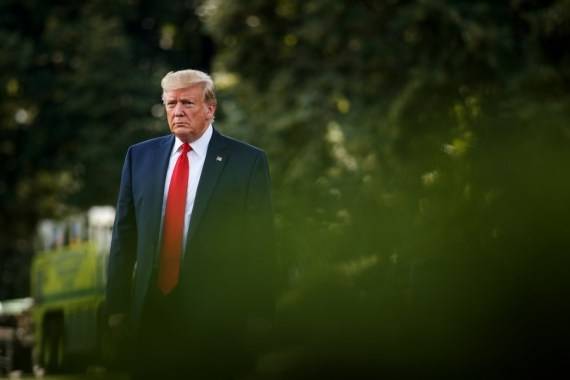 “It is also a sad time for the way our war on those that did such harm to our country ended last week,” Trump added…reports Asian Lite News

Former US president Donald Trump on Saturday used the 20th anniversary of the September 11 attacks to accuse his successor, Joe Biden, of surrendering “in defeat” by withdrawing from Afghanistan. In a campaign-style video message, Trump lamented the chaotic withdrawal of US troops from Afghanistan last month which led to the killing of 13 US service members and dozens of Afghans in a suicide bombing outside the Kabul airport.

“This is a very sad day,” Trump said in the message.

“It is also a sad time for the way our war on those that did such harm to our country ended last week,” he added.

Trump was referring to the US’ Afghanistan invasion in 2001 to eliminate Al Qaeda in the wake of the 9/11 attacks and the chaotic withdrawal after two decades that saw the return of the Taliban in the war-torn country. The United States had toppled the Taliban regime in a bid to find Al Qaeda leaders, especially their chief Osama bin Laden, who had planned the attacks that killed nearly 3,000 people.

The former US commander-in-chief, whose administration oversaw the withdrawal deal with the Taliban last year, said that Biden was made “look like a fool”, stressing that it can never be allowed to happen. Trump blamed the chaotic withdrawal on “bad planning, incredible weakness and leaders who truly didn’t understand what was happening.”

“Joe Biden and his inept administration surrendered in defeat,” he continued. “We will struggle to recover from the embarrassment this incompetence has caused.”

On Saturday, Biden started a full day of memorial events from Ground Zero, the site where the World Trade Center’s twin towers once stood. He then began travel to Shanksville, Pennsylvania, where a hijacked plane crashed in a field as passengers tried to take control of the flight from terrorists.

“Twenty years ago, nearly 3,000 lives were cut short by an unspeakable act of cowardice and hatred on 9/11. As a nation, we must never forget those we lost during one of the darkest moments in our history and the enduring pain of their families and loved ones,” the US president tweeted.