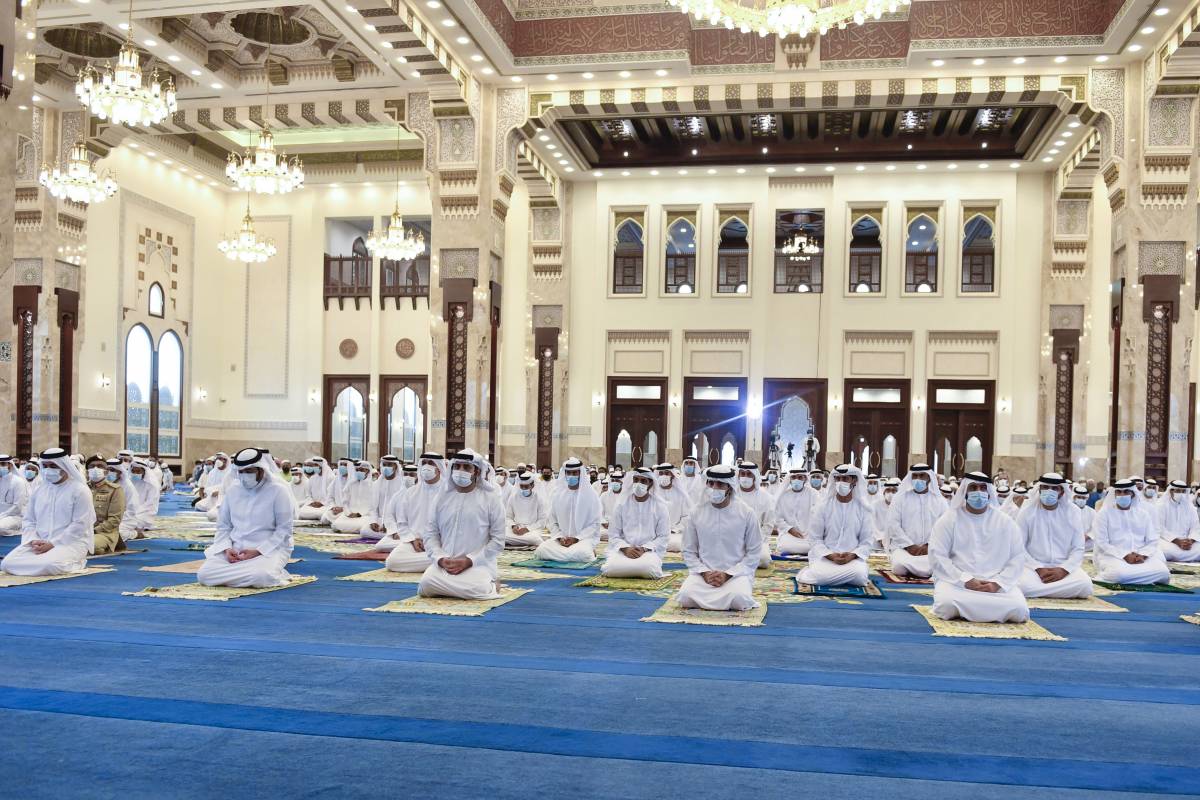 With strict Covid-19 safety measures, the residents and royals of United Arab Emirates offered Eid Al Adha prayers at mosques and musallahs across the UAE on Tuesday morning.

The rulers and Crown Princes offered the prayers with dignitaries and officials in their respective Emirates, it was reported.

He was joined by a congregation of worshippers and a number of Sheikhs, ministers and senior state officials.

In his Eid sermon, preacher Dr. Omar Al Dharie, Executive Director of Islamic Affairs at the General Authority Of Islamic Affaires & Endowments, highlighted the religious significance of the Eid Al Adha and story of sacrifice and obedience of prophet Abraham and his son Ismael.

”It is a great day of sacrifice, giving, generosity, joy, mercy and communication with families and neighnours,” he said, urging members of the community to adhere to precautionary and preventive measures for their health safety.

Following the prayer, Sheikh Mohamed exchanged Eid greetings with well-wishers and then visited the tomb of late Shaikh Zayed bin Sultan and recited ‘Al Fatiha’ in prayer for his soul.

In his speech during the prayers, Dr. Omar Mohammed Al Khateeb highlighted the importance of piety and obedience to the country’s leadership and adhering to the precautionary measures aimed at curbing the spread of the coronavirus pandemic and protecting the community.

Performing the prayer along with Sheikh Saud were H.H. Sheikh Mohammed bin Saud bin Saqr Al Qasimi, Crown Prince of Ras Al Khaimah, and a number of Sheikhs, top officials and members of the Arab and Islamic communities in Ras Al Khaimah.

In his Eid sermon, the imam said the Eid is an occasion of showing compassion, love, mercy, joy and respect between people, urging members of the public to adhere to precautionary measures due to the exceptional health circumstance the world are going through.

He expressed his congratulations and well-wishes to President Sheikh Khalifa, the people of the UAE, and the Arab and Islamic nations on the auspicious occasion.

Performing the prayer along with Sheikh Saud were Sheikh Rashid bin Saud bin Rashid Al Mu’alla, Crown Prince of Umm Al Qaiwain, and a number of Sheikhs, heads of government departments, top local officials and members of the Arab and Islamic communities in Umm Al Qaiwain.

In his Eid sermon, Sheikh Mohammed Ibrahim Humaid said: ”This day is a day of connection, charity and giving in which we reach our kinship and our neighbors, bring happiness to our families.” He urged members of the public to commit themselves to precautionary measures for their health safety.