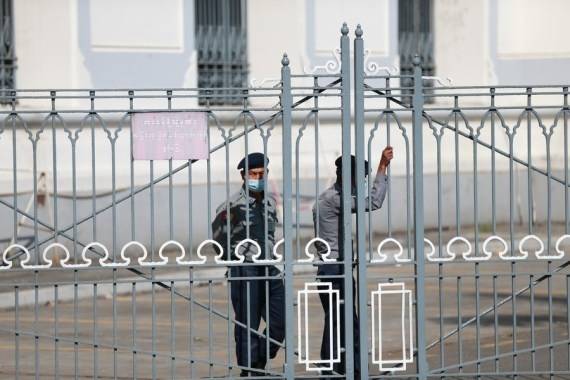 The protesters are demanding the release of former de facto leader Aung San Suu Kyi, who was detained along with other senior government leaders on February 1 shortly before the military took control…reports Asian Lite News

Thousands of people continued their protest for a third consecutive day in Myanmar’s capital Nay Pyi Taw on Monday, against last week’s military coup, forcing police to use water cannons in an effort to disperse the demonstrators.

The protesters are demanding the release of former de facto leader Aung San Suu Kyi, who was detained along with other senior government leaders on February 1 shortly before the military took control of the South Asian nation over the disputed results of the 2020 parliamentary elections, the BBC reported.

Besides the coup, the military also declared a year-long state of emergency and handed over the state power to Commander-in-Chief of Defence Services Sen-Gen Min Aung Hlaing.

According to a report by BBC Burmese, on Monday morning, a day after the country witnessed its largest protest in over a decade, thousands of people from all walks of life gathered in the the capital city for the strike.

A video has gone viral showing the police water cannon being used to disperse protesters.

Kyaw Zeyar Oo, who took the video, told the BBC that “two vehicles sprayed protesters with no prior warning while the crowd was peacefully protesting”.

Towards Monday afternoon, the situation was under control but the water cannons remained, the BBC Burmese report claimed.

Protests were also reported in other major cities, including Mandalay and Yangon.

Meanwhile, state TV has warned the protesters that action will be taken if they threaten public safety or the “rule of law”.

Suu Kyi, former President U Win Myint, and other senior members of the National League for Democracy (NLD) party are currently under house arrest.

In November 8, 2020 parliamentary polls, the former de facto leader’s NLD party obtained more than 80 per cent of the seats and increased its parliamentary majority.

The military or the Tatmadaw had called for an investigation into voting lists, alleging fraud and discrepancies.

But the Union Election Commission rejected the allegations of election fraud on January 29.