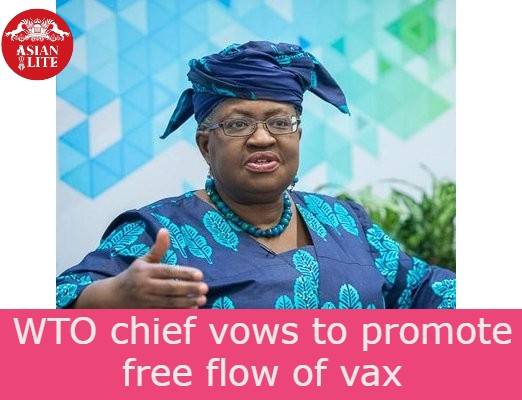 Newly appointed World Trade Organization (WTO) chief Ngozi Okonjo-Iweala has vowed to tackle her top priorities of fighting against the Covid-19 pandemic and promoting the free flow of vaccines and medical supplies, breaking the logjam in the dispute settlement mechanism and reaching a deal to cut fisheries subsidies.

She has promised deep and wide-ranging reforms in her first virtual press conference following the appointment by consensus during the WTO’s General Council.

“We have the twin shocks of the pandemic, the health side and the economic side, which is challenging so many and it has brought economic devastation to many parts of the world,” she told reporters.

“The WTO at this point in time is facing so many challenges. It cannot be business as usual at the WTO.

“We also have the issue of lack of trust which has built up over time, not just between the US and China but also between developing and developed country members,” she said.

Listing her top priorities, the former Nigerian finance minister and World Bank veteran said: “First and foremost, we need to focus on the issue of Covid-19 and what the WTO can do to contribute to solutions. It needs to work with the WHO, with the COVAX Facility, with the ACT Accelerator, all these organizations that are trying to accelerate supplies and vaccines to poor countries.”

She said that the WTO could work with members to lift export restrictions to facilitate the free flow of vaccines and medical supplies.

Okonjo-Iweala previously chaired the board of Gavi, the Vaccine Alliance, which works with the World Health Organisation (WHO) on the COVAX initiative for equitable global access to Covid-19 vaccines in poorer countries.

“Covid-19 is an opportunity for the WTO to have a success and show what it can do, both in the short term and in the long term.”

The director-general designate said the WTO and its members could encourage countries to lift export restrictions in a bid to ensure the free flow of medical commodities, stressing that “vaccine nationalism does not pay”.

“Secondly, how can we encourage and find a third way in which vaccines can be manufactured in many more countries, whilst we don’t discourage research and innovation.”

Another top task Okonjo-Iweala mentioned is the unlocking of the WTO’s dysfunctional dispute settlement system.

The Appellate Body, considered as the supreme court for global trade disputes, is supposed to have seven judges and needs a minimum of three to function. It has been paralyzed since December 11, 2019.

“This is a priority to really reform that and take into account the inputs of all members to make sure we come up with a dispute settlement system that works for all.”

She also stressed that negotiations on digital trade will become increasingly important, underlining that the WTO currently does not currently have rules governing e-commerce.

“There is a need to modernize the rules of the WTO and bring them up to the 21st century issues. We have to look at the digital economy which has become so prominent during this pandemic.”

The fish subsidy talks, ongoing since 2001, aim at cutting billions of dollars in subsidies that contribute to overfishing and illegal, unreported and unregulated fishing.

During her first days in office, Okonjo-Iweala said she would use the political momentum to meet with WTO ambassadors in Geneva as well as her staff in the Secretariat.