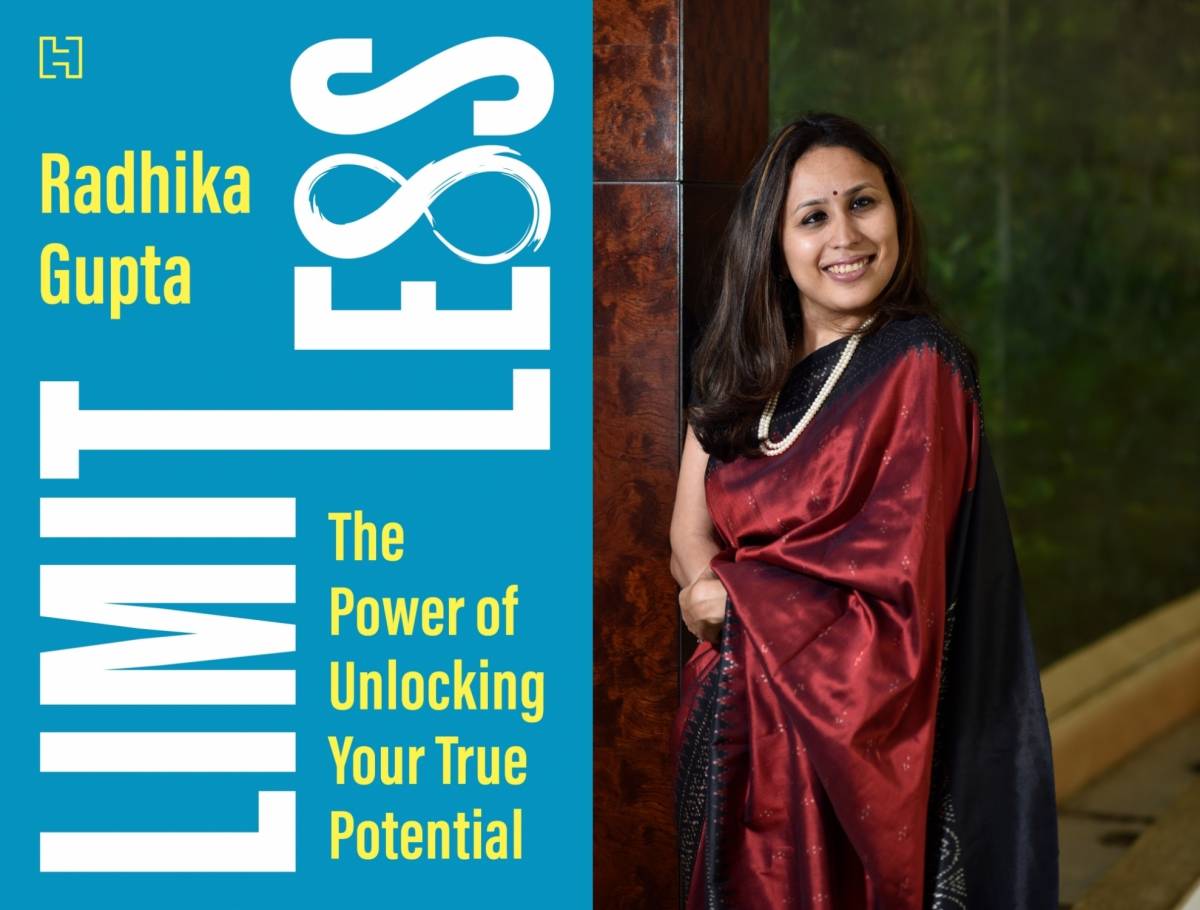 “I also talk about risk — which is easier said than done, because while unicorns sound fantastic in the news, not every start up is a unicorn, and many of us, forget starting up, are scared to even get out of the comfort zone in our day to day jobs,” she added…writes VISHNU MAKHIJANI

We live in a difficult world, easily weighed down by judgement and insecurities, where no one has perfect lives. The key lies in getting past our internal and external limitations, says Radhika Gupta, the dynamic MD & CEO of Edelweiss MF, the youngest and only female CEO in India’s financial services sector, who records her journey in an inspiring book titled ‘Limitless: The Power of Unlocking Your True Potential’ (Hachette).

“We live in a difficult world, where it is easy to be weighed down by judgement and insecurities. People think portfolios are what they see on Twitter, marriages on Insta, and businesses on Excel. The reality is — no one has perfect lives,” Gupta told in an interview.

“We all get rejected, we all feel lost, we have days where we hate what we do and days where we hate how we look. We feel held back sometimes by gender, by socio-economic background, or whatever else makes us different. How do we get past these limitations…internal and external, and live the maximum version of ourselves, is what I focus on in the book,” she added.

It’s been quite a roller coaster for Gupta.

In 2005, after being rejected by seven consulting firms back-to-back-during campus placements at the University of Pennsylvania (UPenn), where she was a student at the Wharton School, she tried to jump off the 19th floor of a building.

“I was a 21-year-old college student then and didn’t know how to handle being told ‘no’. Thankfully, my then classmate and now husband Nalin (came to my rescue (something he still does in many situations) and, as it happens with most of us, my life turned out fairly fine,” Gupta writes in the book.

She began her career at McKinsey, and then cut her teeth as an analyst on Wall Street in the mid-2000s at a boutique hedge fund called AQR Capital Management. In 2009, she moved back to India to start her own asset management company with two of her UPenn classmates. It was named Forefront Capital Management and later sold to Edilweiss Financial Services “and on most days, I wake up thinking I have the best job on earth”, she writes.

Comparison and risk form two important themes in the book, which is liberally peppered with her own experiences and with those of others.

“Comparison is inevitable, it starts from childhood, from your parent’s comparing you to what I call ‘Sharmaji ka beta’ to you comparing yourself to your classmate. I share my own struggles with comparison, as a naturally competitive person, and how to think about it in a more healthy way,” Gupta said during the interview.

“I also talk about risk — which is easier said than done, because while unicorns sound fantastic in the news, not every start up is a unicorn, and many of us, forget starting up, are scared to even get out of the comfort zone in our day to day jobs,” she added.

To this end, Gupta offers a seven-step approach:

Kicking The S**T Out Of Rejection

Choose Your Sky, Learn To Fly.

The idea of writing the book, Gupta said, was a “contradiction”.

“I always wanted to write it, but never thought it would happen. I have enjoyed writing since a young age, it’s one of the few hobbies I have had, but always believed a book is something I would come to much later in life. The Covid induced lockdown and lack of travel changed that, and when Hachette came to me with the idea, after the initial resistance, I said why not. I had also been getting feedback on my social handles, where I have been micro-blogging, to do a long form book,” Gupta explained.

She thoroughly enjoyed the journey of putting “Limitless” together.

“I spent time thinking about the themes I wanted to talk about a lot, the issues I had grappled with… and then thinking through the stories I wanted to share, both from my life and those around me. This is not an autobiography, where things are sort of chronological, so the outlining process was important.

“My hope is the stories are authentic and honest, simple and yet meaningful. I spent about six months thinking through the outline, and then another six writing, thinking through the words, the tone. Since my weekdays are very full with my day job, ‘Limitless’ was essentially a weekend project. And then there was time on edits, versions, and more versions. As I say… it’s a real labour of love,” Gupta maintained.

Harkening to the Bollywood movie “Dangal”, in which the young wrestler Geeta’s father (played by Aamir Khan) objects to her coach attempting to change her style and finally tells his daughter, “Attack karke khel” (play in attack mode), Gupta writes: “My story is the same.”

“I have found self-confidence – which had wandered off somewhere in a battle of comparisons and a quest for perfection – by embracing my uniqueness, and I have learnt that I am at my best when I play my game my own way, in attack mode. It’s a liberating feeling, to say the least.

“Each of us has an open sky of opportunities; we can fly anywhere we choose to and at the speed we want, because we are all equipped with wings. Those wings may be of different colours, some a little bigger and some slightly smaller than those of the person next to us. They may be a little imperfect, but nonetheless they are wings to help us soar. If there is one thing I hope this book leaves you with, it is to look past your challenges – internal, external, whatever they may be – and trust in your wings. If you do, you will realise just how far you can fly…because your potential to soar is truly limitless,” Gupta concludes the book.