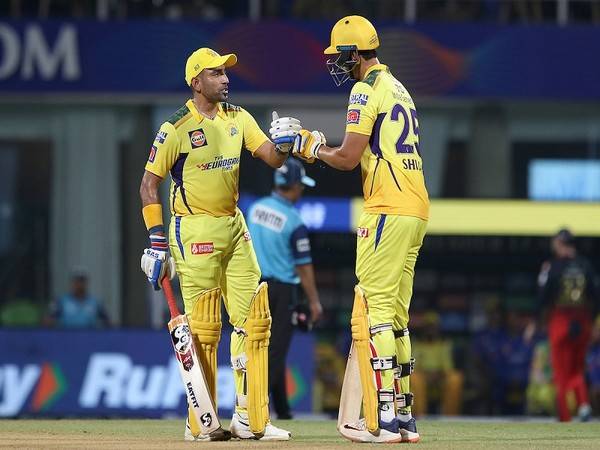 CSK were in a spot of bother at 36-2 after 6.4 overs but Uthappa and Dube took RCB bowlers to the cleaners and stitched a whopping 165 runs off just 74 balls for the third wicket, helping the team post a big total…reports Asian Lite News

Superlative bowling performance by Maheesh Theekshana (4/33) and skipper Ravindra Jadeja (3/39) and brilliant knocks by Shivam Dube and Robin Uthappa helped Chennai Super Kings beat Royal Challengers Bangalore by 23 runs in an IPL 2022 match and register their first win of the season at the D Y Patil Stadium, here on Tuesday.

Sensational counter-attacking half-centuries by Shivam Dube (95 not out off 46) and Robin Uthappa (88 off 50) propelled Chennai Super Kings to a mammoth 216/4 in 20 overs. CSK were in a spot of bother at 36-2 after 6.4 overs but Uthappa and Dube took RCB bowlers to the cleaners and stitched a whopping 165 runs off just 74 balls for the third wicket, helping the team post a big total.

Chasing a huge total, RCB were off to a poor start as they lost three key wickets inside the powerplay. Skipper Faf du Plessis (8), who mis-hit a delivery by Maheesh Theekshana to long-on, was the first one to get dismissed. Very soon, Virat Kohli (1) picked out the fielder in the deep on the on-side off Mukesh Chouhdary.

Attacking batter Glenn Maxwell tried to put the pressure back on Theekshana and CSK with back-to-back sixes in the sixth over. However, the Sri Lankan spinner continued to impress by dismissing Anuj Rawat (12) in the same over with a carrom ball as RCB were reduced to 42/3. Maxwell looked like he was connecting his shots but he too had to walk after he was castled by the arm ball from Ravindra Jadeja.

However, the next batters — Suyash Prabhudessai and Shahbaz Ahmed — had a 60 run partnership for the 5th wicket and they brought RCB back in the game. Debutant Prabhudessai showed his innovativeness during his enterprising 18-ball 34 knock before he was cleaned up by Theekshana.

On the other hand, Shahbaz also played a fine hand of 41 while the in-form Dinesh Karthik took over with an attacking 14-ball 34. Karthik targeted Mukesh Choudhary in the 17th over with two sixes and a four in a 23-run over, but he lacked support at the other end. Eventually, Karthik, who got out in the 18th over, had too much to do as RCB could manage 193/9 on the board in the stipulated 20 overs.

Earlier, put in to bat first, the out-of-form CSK opener Ruturaj Gaikwad got off to a good start but he couldn’t carry his innings longer and fell on 17 to Josh Hazlewood. Thereafter, Moeen Ali (3), who came out to bat at No 3 then got run out courtesy of a terrible mix-up between two CSK batters and a sensational fielding effort from RCB debutant Suyash Prabhudessai.

After getting the big wickets of Ruturaj and Moeen, RCB were on top but Dube and Uthappa had other plans. The duo took their time to settle down as CSK reached 60/2 after 10 overs.

During their important stand, Uthappa smashed 9 sixes and four boundaries while Dube hit eight sixes and five fours. Shivam Dube’s knock of 95 not out has also become the highest individual score in a CSK-RCB encounter equalling 95 by Murali Vijay in IPL 2011 final in Chennai.

For RCB, Akash Deep conceded 58 runs in his four, while the otherwise economical Wanindu Hasaranga gave away 35 in his two overs and picked two wickets. The most economical on the night was Hazlewood (1/33), but even he went for over-8 an over.