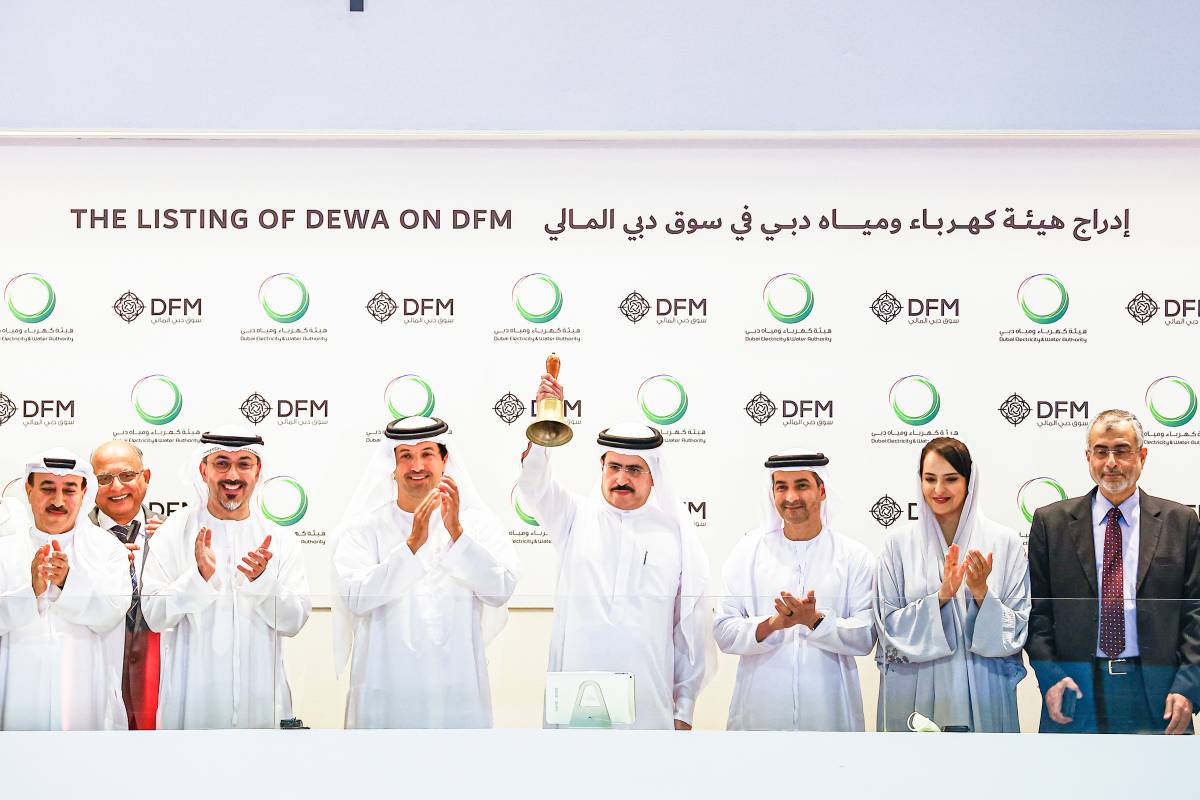 The stellar share rose to AED3.00 in early trade, up from the IPO price of AED2.48, before settling at AED2.87, 15.7 percent up, by the end of the session, reports Asian Lite Newsdesk

Shares in Dubai Electricity and Water Authority (DEWA) surged 15.7 percent on their market debut on Tuesday after its US$6.1 billion initial public offering (IPO), the region’s biggest since Saudi Aramco’s.

The utility’s shares accounted for over 73 percent of Dubai Financial Market’s (DFM) trading value on the first trading day. The market closed at 3,568.830 points following AED1.788 billion of trades.

Dewa is the first public entity to go public as part of the Dubai Government’s plan to list 10 entities to boost liquidity in the market. The company plans to pay dividends twice a year to investors.

After pricing its shares last week at AED2.48 per share, DEWA opened the day’s trading as the largest company on the DFM, with a market capitalisation of AED124 billion (US$33.8 billion).

DEWA sold 9 billion shares in its IPO, representing 18 percent of its total share capital, and raised a total amount of AED22.3 billion (US$6.1 billion), making this the largest IPO in the UAE and the largest in Europe, Middle East and Africa region so far in 2022.

The Government of Dubai continues to own 82 percent of DEWA’s share capital. The IPO was oversubscribed by 37 times (excluding cornerstone and strategic investors), with strong demand across all tranches.

“DEWA has contributed and benefited from the Emirate’s strong development, as the exclusive provider of electricity and water services to a flourishing international city. The strong interest we have seen from institutional and retail investors reflects the confidence in DEWA as a globally leading utilities company. We are proud to offer investors the opportunity to be a part of DEWA’s future as it supports Dubai’s growth and energy transition.”

Al Marri said, “We are delighted to welcome the listing of DEWA, which gives a strong impetus to DFM’s diversification strategy that focuses on attracting IPOs and listings from varied economic sectors. Our ultimate objective is to increase the representation of dynamic economic sectors that play a pivotal role in the economy of Dubai and the UAE in line with the leadership’s vision and Dubai’s strategy to develop its financial markets and further strengthen its status as a leading international capital markets hub.

“Additionally, the new IPO and listing clearly indicates issuers’ deep confidence towards DFM and its world-class regulations, infrastructure and services. It also bolsters DFM’s leading position as the most favoured exchange for businesses looking to go public and raise necessary funds to implement their growth strategies.”

Ali stated, “The IPO and listing of DEWA enables investors in general and income investors, in particular, to participate in the success story and growth of the dynamic utilities sector, which is usually characterised by stability and sustainable growth. This significant listing, alongside other listings as part of the Government of Dubai’s plan to list ten companies, will improve the market width and depth and diversify investment opportunities.

“We are also upbeat about the outlook of IPOs and listings on DFM given our ongoing discussions with numerous companies that are seeking to expand their business supported by the growing confidence in the national economy and the widespread regulatory developments that have greatly augmented market attractiveness by offering potential issuers various listing options.”.

DEWA’s shares are traded within the Utilities Sector. No price limits have been applied to the shares during the first day of trading, as they will be applied from the second day of listing. The IPO price of the share has been defined at AED2.48. (WAM)