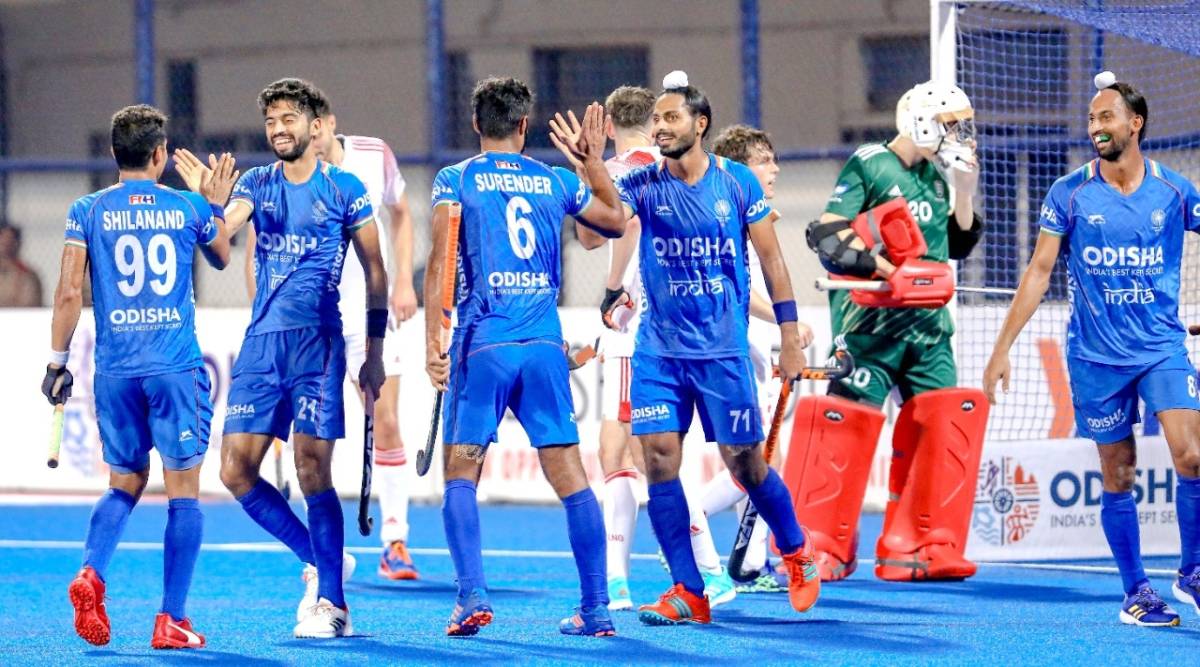 Their celebrations did not last long as Bandurak converted his second penalty corner to make it 2-2 in the 27th minute. That’s how the score stayed at half-time…reports Asian Lite News

A penalty stroke converted with 15 seconds remaining in the match denied India three points but another stroke missed in the sudden-death shoot-out got them a bonus point against England in a thrilling FIH Pro League match here on Saturday.

England’s Sam Ward converted the first penalty stroke but pushed wide the all-important stroke in the shoot-out as India won the sudden death 3-2 and claimed two points while England had to be satisfied with one. With this win in the shoot-out, India moved to the top of the FIH Pro League table with 18 points from nine matches, one point ahead of Germany, who have a match in hand.

England stalwart Sam Ward was the hero as he converted a penalty stroke in the last seconds of the match to make it 3-3 for the visitors as they came back from a goal twice to hold India in regulation time. With both teams missing a few chances in the shoot-out, Abhishek scored with an assured effort to make it 2-2 from five attempts each in the shoot-out.

Ward was left devastated when he missed a stroke in the sudden-death shoot-out when Indian goalkeeper Krishan Pathak was penalised for going to clear the ball after losing his helmet while trying to stop Liam Ansell in the shoot-out. In such a situation, the goalkeeper is supposed to pick his helmet instead of going for the ball.

For Olympic bronze medallist India, Harmanpreet (twice), Shamsher Singh and Vivek Sagar Prasad missed in the shoot-out while Abhishek scored twice and Raj Kumar Pal once. For England, Liam Ansell missed two attempts while Thomas Sorsby, and David Goodfield; Christopher Griffiths scored one and missed another while James Albery scored one for England in the shoot-out that lasted seven attempts each.

Earlier, England went into the lead in the 7th minute when Nicholas Bandurak converted a penalty corner after the initial exchanges. But the lead lasted only a few minutes as India fought back to level scores, with Abhishek slotted home off a reverse pass on a pullback by Shamsher Singh.

India went 2-1 ahead in the 26th minute when Shamsher, who had the final touch from the attacking side, was credited with a goal when an England defender guided the ball across the line while trying to clear the ball from the goalmouth.

However, their celebrations did not last long as Bandurak converted his second penalty corner to make it 2-2 in the 27th minute. That’s how the score stayed at half-time.

India thought they had done enough in this tough encounter when, in the 51st minute, Harmanpreet Singh, off India’s fourth and final penalty corner, scored his 99th international goal by narrowly squeezing through a powerful low flick between the post and England goalkeeper Oliver Payne, who had otherwise a great match, pulling off some superb saves.

However, England were awarded a penalty stroke with 15 seconds to go when defender Jugraj Singh was ruled to have stopped the ball with his leg near the goalmouth.

Ward stepped up to easily beat goalkeeper Pathak to make it 3-3 and save a point for England. But in the end, he could not get England the bonus point off another penalty stroke, this time dragging it narrowly wide of the post.

India had better possession in the match while England had 29 circle penetrations to 24 by India. They also earned five penalty corners to four by India.