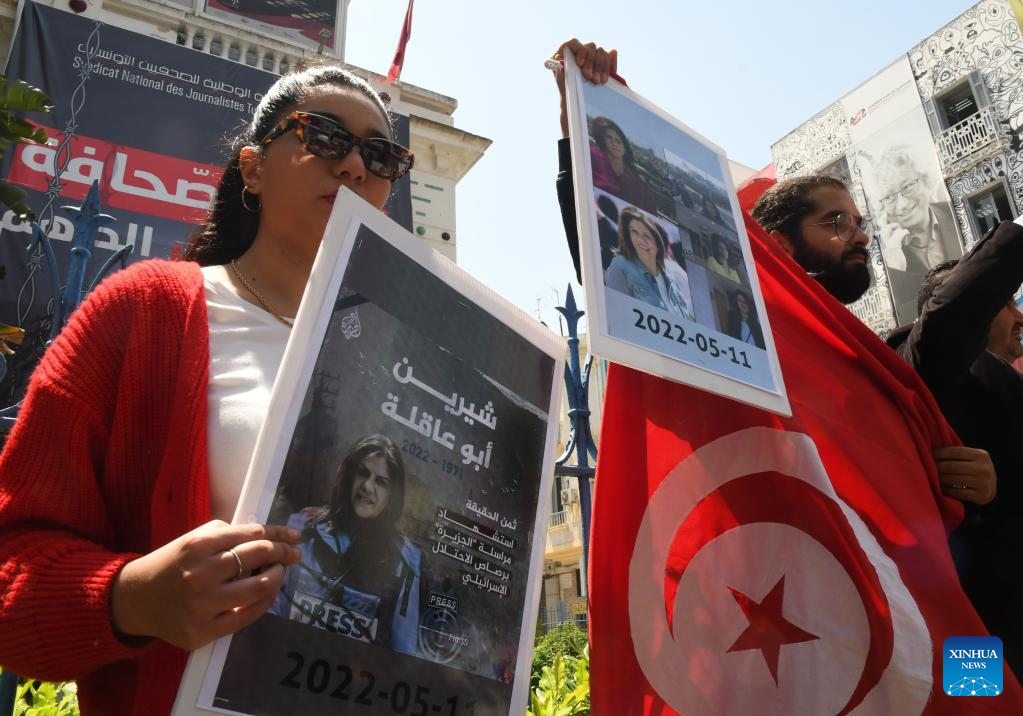 Shireen Abu Akleh was shot by the Israeli troops early Wednesday while covering an Israeli military raid and died shortly after. Swift and widespread condemnation has given way to shock and fear … reports Mukesh Sharma from Doha

The veteran reporter was hit by a live bullet on Wednesday as she was covering an Israeli military raid in the city of Jenin, Al Jazeera said. The Doha-based network has been full of stories linked to the killing of the woman television journalist by troops who shot her while she was reporting in full press gear, including an anti-flak jacket marked ‘press’. However, Israel blamed the Palestinian militants for the death of the reporter.

“According to the information we’ve gathered, it appears likely that armed Palestinians — who were indiscriminately firing at the time — were responsible for the unfortunate death of the journalist,” Bennett said in a statement.

Palestinian Authority President Mahmoud Abbas was vocal in blaming Israeli forces for the death of the journalist, calling it a “blatant cold-blooded murder by the Israeli Army”.

Al Jazeera quoted the executive director of the International Press Institute, Barbara Trionfi, as saying that the killing comes at a time of increased attacks against journalists in the West Bank and Gaza.

There was obvious indignation in the Palestinian Territories after the incident. An outraged Palestinian told IANS that Akleh was a brave journalist who always fought for the truth. “She was a true icon and inspiration for all of us. She was brutally killed by a settler colonial regime though she sported her full press gear. The killing was deliberate, we are all outraged and hurt by this ongoing perpetual injustice,” said the woman requesting anonymity. We’ve had enough of ‘neutral’ and fake media coverage that does not speak the truth and perpetuates the settler’s tales, she added.

Amid global calls for an independent probe into the killing, Palestine’s UN ambassador Riyad Mansoursaid his country will “not accept” an investigation by the “Israeli occupying authority” and has held the Israeli army responsible for the “assassination” of Abu Akleh, Al Jazeera reported.

Addressing media persons at the UN headquarters in New York, Mansour said: “The story of the Israeli side does not hold water, it is fictitious and it is not in line with reality and we do not accept to have an investigation on this issue with those who are the criminals in conducting this event itself.”

Meanwhile, an Israeli army chief said that a special probe team has set up to “present the facts in full” over the killing of an Al-Jazeera journalist.

Shireen Abu Akleh was shot by the Israeli troops early Wednesday while covering an Israeli military raid and died shortly after, said the Palestinian Health Ministry, adding another Palestinian reporter was shot in the back during the raid.

The Israeli army earlier said it had started investigating into the incident, suggesting the possibility of the journalists being shot by “armed Palestinians.” However, the army chief Aviv Kochavi later stepped back from the claim, saying “at this stage it is not possible to determine from which shooting she was hit and we regret her death.”

“In order to reach the truth, we have set up a special team that will clarify the facts and present them in full and as soon as possible,” he noted.

Meanwhile, Israeli Prime Minister Naftali Bennett said in a video message that Israel has asked the Palestinian Authority to conduct a joint forensic analysis but “the Palestinians refused.”

Al-Jazeera accused Israel of killing the journalist and called on the international community to “condemn and hold the Israeli occupation forces accountable for deliberately targeting and killing” its colleague.

“We pledge to prosecute the perpetrators legally, no matter how hard they try to cover up their crime, and bring them to justice,” Al-Jazeera said in a

The Arab party in Israel’s governing coalition said on Wednesday that it would stay in the coalition, preventing another crisis for the embattled government.

Mansour Abbas, leader of Israel’s Arab political party Ra’am, said his party would stop asking to “freeze” its membership in the coalition led by Prime Minister Naftali Bennett, a demand he previously made in protest against the police actions at Al-Aqsa Mosque in recent weeks.

“We decided to give an additional opportunity to the coalition and the government,” Abbas told reporters in the parliament.

“We reached understandings for the betterment of Arab society and Israelis in general,” he said.

Ra’am is one of the eight parties that compose the cross-partisan coalition which also includes pro-settler and liberal parties. The parties have little in common but were united to oust former Prime Minister Benjamin Netanyahu, who is facing a criminal trial over corruption charges.

With the formation of the current coalition in June 2021, Ra’am became the first Arab political party to be included in a ruling coalition in Israel.

If Ra’am, with four seats in the 120-member parliament, pulls out of Bennett’s coalition which has only 60 seats now, the coalition will be in the minority and in dange of dissolution as it may struggle to fend off no-confidence votes. ■