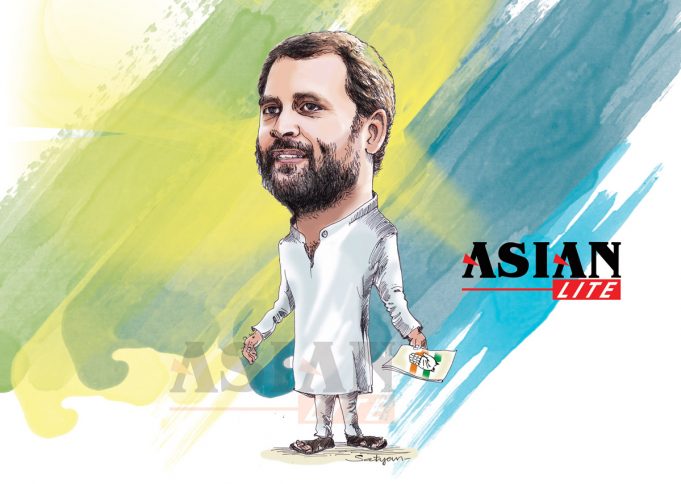 With a confirmed visit from Prime Minister Narendra Modi in February to further strengthen ties between the UAE and India it seems unlikely that Rahul will get a look in till March….writes Bikram Vohra

Members of this organisation have gone on to become Prime Ministers of Mauritius, Trinidad and Tobago, Singapore and Guyana. Perhaps Rahul is hoping that by being there some that ambitious magic might wear off on him. But that crack aside, it is a decent platform although one was not quite sure why he was coming to Dubai after that. Suddenly that leg of the tour was postponed.

It was reported that the AICC was chalking out his programme under the guidance of Arithi Krishna, currently Deputy Chairman  for the NRI Forum Karnataka government. Amongst the more prominent Congress luminaries who had expected to accompany the newly anointed Congress President from Bahrain are Shashi Tharoor and Sam Petroda.

With a confirmed visit from Prime Minister Narendra Modi in February to further strengthen ties between the UAE and India it seems unlikely that Rahul will get a look in till March.

Modi has made this region his most favoured and the two countries are co-operating on several ventures with an emphasis on regional security. There is so much going on across the board that these are exciting times in terms of mutual benefit. Modi will be here for the World Government Summit (WGS) from Feb 11 to 13.

It might be recalled that in August 2015, Modi received a rock star welcome in this highly advanced city state and also home to three million Indians. The first visit in 2015 covered defence, security measures and business opportunities. Modi also established a one on one relationship with the top leaders of the UAE and it has flourished in the aftermath.

With 150 nations congregating at Dubai for the WSG and Indian being the nation (guest) of honour Modi clearly intends to make full use of this three day global platform to put India centrestage and literally open the windows to the world.

Since Rahul would have no locus standi at the WSG and there were only a few days to organise his visit it was probably prudent to delay the meet.

According to certain sources in the planning cell for this visit it was initially decided to hold the meeting at the iconic Sharjah stadium, the venue for the recently concluded and highly successful T10 cricket tournament which has a seating capacity of 19000 people. According to one report, the organisors expect at least 20,000 ‘fans’ but that is a bit on the hopeful side. A quarter of that would be huge.

The same sort of discomfort will be filtering through the ranks of the high profile Indians who are not quite sure if they should fetch up, if they are being ‘watched’ and will there be repercussion in the aftermath. Usually, they are willing to squabble over ‘who sits closer’ to any VIP visiting from India.

As such any meet and greet initiative designed to hedge bets would have been lowkey and muted and one should not expect the sort of pell mell rush by the so called movers and shakers that marked the Modi visit after his taking over as Prime Minister even if Rahul visits in March.

After Modi grabs the limelight and interacts with the Indian cream they are not likely to ‘frasternise’ openly with the as yet nascent opposition.

That said there is a certain curiosity factor that might kick in and one can expect ‘volunteers’ with a Congress leaning to exhort Hurrah Henry NRIs to come and chat informally with the new kid on the block. Rahul also has expressed a desire to mix with the Indian youth and a chat on campus might also be included what with over 10,000 college going Indians in the UAE.