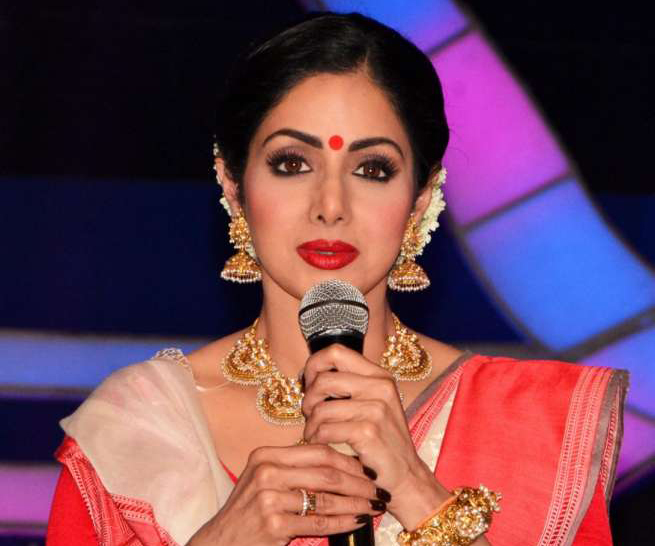 Veteran actress Sridevi, 54, has passed away. The actress, who was in Dubai for a family function, reportedly suffered a cardiac arrest.

The actress, who was in Dubai for a family function, reportedly suffered a cardiac arrest.

“Shocked to hear of passing of movie star Sridevi. She has left millions of fans heartbroken. Her performances in films such as ‘Moondram Pirai’, ‘Lamhe’ and ‘English Vinglish’ remain an inspiration for other actors. My condolences to her family and close associates,” the President tweeted.

Modi also took to Twitter, saying: “Saddened by the untimely demise of noted actor Sridevi. She was a veteran of the film industry, whose long career included diverse roles and memorable performances. My thoughts are with her family and admirers in this hour of grief. May her soul rest in peace.”

Congress President Rahul Gandhi also condoled the death of the vertan actress saying that she was an incredibly talented and versatile actress.

“Shocked to hear about the sudden and untimely death of one of India’s favourite actress, Sridevi. Sridevi was an incredibly talented and versatile actress whose vast body of work spanned a range of genres and languages. My condolences to her family. May her soul rest in peace,” Gandhi tweeted.

Union Minister of Textiles and Information and Broadcasting, Smriti Irani described Sridevi as a powerhouse of acting.

“Sridevi – a powerhouse of acting, a long journey embellished with success comes to a sudden end. My condolences to her loved ones and fans,” Irani said in a tweet.

Union Home Minister Rajnath Singh also condoled the actress’s death saying that her sudden demise was a big loss to the film industry.

“Anguished to learn of the sudden demise of veteran film actor Sridevi. She had a long and successful career in the film industry with several remarkable performances. Her demise is a big loss to the film industry. My thoughts are with her family and fans. May her soul rest in peace,” Rajnath Singh said in a tweet.

Union Coal and Railway Minister Piyush Goyal said: “Deeply saddened by the untimely demise of versatile actor Sridevi. Her contribution to Hindi cinema is unparallel and will be remembered for generations to come. My condolences to her family and countless admirers.”

Born in Sivakasi, Tamil Nadu, Sridevi started her career as a child actor at the age of four. She had won the Kerala State Film Award for Best Child Artist.

At the age of 13, Sridevi started her first leading role in the Tamil film Moondru Mudichu directed by K. Balachander. She followed it with a number of films with Kamal Haasan and Rajinikanth.

Sridevi has known for her performance is some of the iconic films like “Mr India”, “Nagina”, “Sadma”, “Chaalbaaz”, “Chandni” among many others. The Padma Shri recipient was last seen in “Mom” in 2017.

Here is what some of the Bollywood personalities tweeted:

Nimrat Kaur: “Absolutely devastated to hear about the passing of #Sridevi. What a dark black terrible moment in time. Gutted.”

Sushmita Sen tweeted: “I just heard Ma’am Sridevi passed away due to a massive cardiac arrest. I am in shock…can’t stop crying…”

Madhur Bhandarkar tweeted: “Unbelievable Shocking & Heartbreaking to hear about the demise of #Sridevi, one of the talented Actress of Indian Cinema. Prayers and strength to the family. #OmShanti”

Priyanka Chopra: “I have no words. Condolences to everyone who loved #Sridevi . A dark day. RIP.”