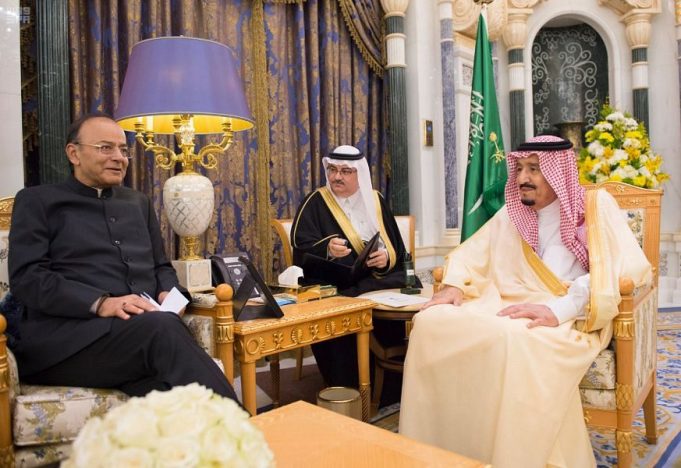 “Called on His Royal Highness The King of Saudi Arabia, February 18,” Jaitley tweeted following the meeting.

Jaitley is on a two-day official visit to Saudi Arabia to co-chair the 12th India-Saudi Arabia Joint Commission Meeting from February 18-19.

Both discussed bilateral relations and the ways to strengthen them in various fields, according to a report by the kingdom’s official news agency SPA.

Later on Sunday, Jaitley along with his Saudi counterpart formally inaugurated the Saudi-India Business Council.

Thereafter, Jaitley also visited the “India Pavillion” at the prestigious Saudi National Heritage and Cultural Festival Janadriyah, at which India is the guest of honour country this year.

The India Pavillion, which highlights the Make in India initiative, is based on the theme “Saudi ka Dost Bharat”.

According to an Indian Finance Ministry release in New Delhi, Jaitley will meet the Saudi Minister of Trade and Investment Majid Al-Qassabi on Monday to discuss bilateral issues.

“He is also likely to meet other Saudi dignitaries during his visit,” the statement said.