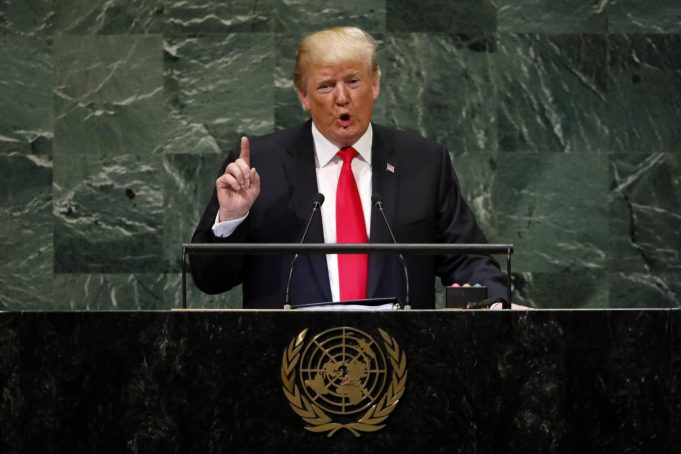 President Donald Trump before the United Nations General Assembly demanded that changes be urgently made to the “world trading system” and defended his trade war with China, saying that the US trade deficit with the Asian giant is “not acceptable”…reports Asian Lite News

“Last month, we announced a groundbreaking US-Mexico trade agreement. Yesterday, I stood with (South Korean) President Moon (Jae-in) to announce the successful completion of the brand-new US-Korea trade deal,” said the US leader in a somber and calmly forceful address to the General Assembly, Efe reported.

“This is just the beginning. Many nations in this hall will agree that the world trading system is in dire need of change,” he declared.

Trump warned that the US “will no longer tolerate it and we will not allow our workers to be victimized, our companies to be cheated, and our wealth to be plundered and transferred.”

“The United States has just announced tariffs on another $200 billion in Chinese-made goods. The total so far of $250 billion,” he said.

“I have great respect and affection for my friend, (Chinese) President Xi (Jinping), but I have made clear that our trade imbalance is just not acceptable. The market distortions and the way that they deal cannot be tolerated as my administration has demonstrated,” Trump said.

“Sovereign and independent nations are the only vehicle where freedom has ever survived, democracy has ever endured, or peace has ever prospered,” said the US leader.

“Together, let us choose a future of patriotism, prosperity, and pride. Let us choose peace and freedom over domination and defeat,” he urged the assembled world leaders and delegates.

Trump arrived late for his scheduled speech and sparked laughter from the crowd with one of the earliest statements of hyperbole in his speech.

“In less than two years, my administration has accomplished more than almost any administration in the history of our country,” he claimed, engendering a smattering of laughter from the crowd, which then increased when he quipped, with a broad smile, “I did not expect that reaction. That is OK.”