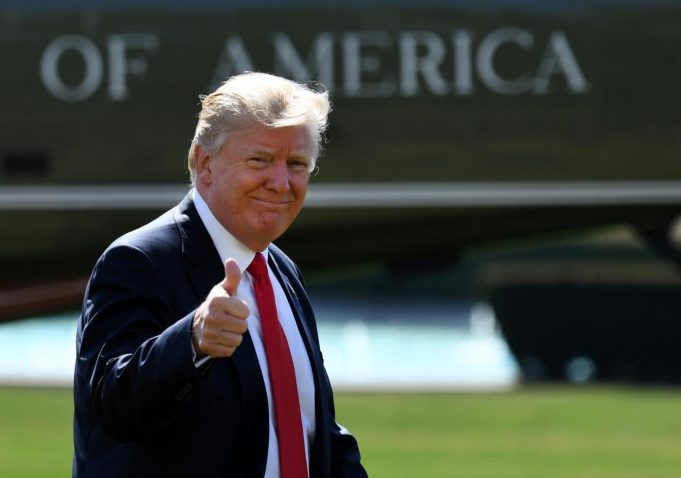 “We’re looking at coming. If I can, I will,” President Donald Trump said during a meeting at the White House with Israeli Prime Minister Benjamin Netanyahu … reports Asian Lite News.

President Donald Trump said on Monday that he may travel to Jerusalem in May for the official opening of the new US Embassy to Israel.

“We’re looking at coming. If I can, I will,” he said during a meeting at the White House with Israeli Prime Minister Benjamin Netanyahu, Efe reported.

Trump did not specify whether he would travel to Jerusalem in May or sooner, given that his administration’s intention is to send just a small delegation from the US diplomatic mission comprised of the ambassador and a few advisers to the Jerusalem ceremony, while the new embassy itself is under construction.

The President said, however, that the new embassy will be built very quickly.

In addition, Trump expressed optimism regarding the future of his efforts to bring about peace between the Israelis and Palestinians, despite the fact that his decision to transfer the US Embassy to Jerusalem from Tel Aviv spurred the Palestinians to assert that the US president could not be a mediator in that process.

“The Palestinians, I think, are wanting to come back to the table very badly,” Trump said. “If they don’t, you don’t have peace.”

Trump argued that his decision to recognize Jerusalem resolved a tough issue dividing Israel and the Palestinians. “We’ve taken it off the table,” he said. “So this gives us a real opportunity for peace.”

“We’re working very hard on doing that and I think we have a good chance,” the president said.

Netanyahu, meanwhile, thanked Trump for the “historic” recognition of Jerusalem as Israel’s capital and compared the move to – for instance – the 1917 Balfour Declaration in which the then-British foreign secretary promised the Jews a homeland in the Middle East.

The Israeli leader also emphasized the two nations’ mutual concern about Iran’s activities in the region, saying that Tehran “must be stopped.”