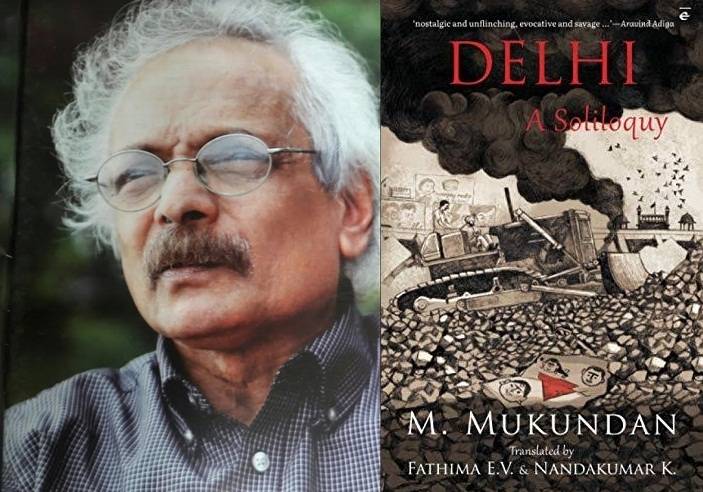 “So I came back home, back on the banks of my beloved Mayyazhi river. Life here is exhilarating. But I miss a lot – Delhi’s Press Club, IIC and India Habitat Centre,” Mukundan said…writes Vishnu Makhijani

Back in the 1960s, the national capital was a “quiet and safe place” where women were not harmed and you could sleep on your terrace “without locking the main house door”. Then, “a nouveau riche class prospered” and outwardly, New Delhi today “is a beautiful city” but “beneath lies hunger, filth and diseases”.

Still, Malayalam author M. Mukundan is nostalgic about a city where he lived for 40 long years before moving back to his hometown of Mahe and this prompted him to write “Delhi – A Soliloquy”, translated by Fathima E.V. and Nandakumar K (Westland/Eka) that has been shortlisted for the Rs 25 lakh JCB Prize for Literature, India’s richest literary award.

“When I was in Delhi, I felt nostalgic about Mahe. Now it is the other way round – I’m nostalgic about Delhi. There’s no ideal place to live in, where you are that is your home,” Mukundan, four of whose works have been adapted for the big screen, told in an interview.

“In the early 60s when I arrived in Delhi, it was a quiet and safe place. There were villages within the city. After seeing a late night movie at the Race Course theatre, women and children would walk down to Lodhi Colony past midnight. No woman was harmed.

“In summer, we used to sleep on the charpoys spread out on the terraces of our houses without locking the main house door down below. It was a city anybody will dream of living. And then Delhi changed all of a sudden – a brutal, grotesque change.

“Factories and commercial establishments came up, attracting unemployed poor people from other states. Building mafias destroyed villages and fields and built ugly high-rise buildings. Poor people were pushed away to filthy slums where they led a wretched life of deprivation. Throwing away all values, a nouveau riche class prospered. Outwardly, Delhi is a beautiful city. But beneath lies hunger, filth and diseases,” Mukundan elaborated.

“The book is a rambling, intimate epic. It captures what it means to be a small person in a big capital. How the relentless wave of history impacts these marginal people who have come to Delhi in search for a better life. Mukundan has brought to life the very real characters in this book with great sincerity? All through the novel you are looking at the small things and through them understanding the big,” the JCB Jury said of the book.

Narrated by Sahadevan, a Keralite who moves to Delhi in his twenties, “Delhi: A Soliloquy” is the story of the changes and growth of the city with Sahadevan’s life as the backdrop. Journeying through life, he comes across immigrants scattered across the capital city, all struggling in their own ways. The book is about forging friendships, and finding his own people in a city he comes to call home.

“I lived in Delhi for nearly 40 years. For 36 years I worked in a Diplomatic Mission while the remaining four years I spent on wandering. My wanderlust always helps me in my creative pursuits. When I have a sense of belonging to a place, I feel like writing about it.

“I developed strong bonds with Delhi. That’s why I wanted very much to write about what I’ve experienced, I’ve seen or I’ve heard of in this city. Long ago I told myself that I should one day write a novel about this hypnotic city. And I wrote it, though many years later,” Mukundan elaborated.

Being a witness to the events he’s described in the book, “everything I had experienced I wove into the novel. Of course to avoid factual errors and anachronisms I had to check dates and names of places. That was a process that lingered all through the writing of the novel”.

It’s been almost 20 years since he moved back to Mahe. What has the transition been like?

After retiring in 2004 from the French Embassy, where he worked in the cultural section and for which he was honored by the French government, he said he didn’t want to leave Delhi immediately but the Kerala government nominated him as the president of its Sahitya Akademi.

“So I came back home, back on the banks of my beloved Mayyazhi river. Life here is exhilarating. But I miss a lot – Delhi’s Press Club, IIC and India Habitat Centre,” Mukundan said.

Speaking about his work in the French Embassy, he said he thoroughly enjoyed it.

“I was part of the French team that brought to India Picasso’s original works. I could meet and interact with a large number of French intellectuals such as the legendary Regis Debray and Jacques Derrida. I used to write speeches for the Ambassadors. At a time when there wasn’t Internet or Google, it was a tough job.

“Want to know what parting gift the Embassy gave me? Twenty-four bottles of wine, neatly packed in two cartons; all sorts of wine some costing a fortune,” Mukundum said.

There is also the insignia of Chevalier in the Order of Arts and Letters awarded to him in 1998.

As for his books that have been adapted for the big screen, Mukundan said only one came out very well – “God’s Mischief”.

“This was adapted from the novel by the same name. The director of the film Lenin Rajendran (a die-hard communist as his name suggests) and I wrote the scenario together. ‘God’s Mischief’ won the State Award for the best feature film. The worst was ‘Savithri’s Girdle’. I didn’t write the scenario for this. I only gave the producer the film rights. I could watch the film only for about 15 minutes and then I walked out of the theatre. To date, I haven’t seen the remaining part of the film. It was unbearable. Now I give film rights of my stories only if I could write the scenario myself. Such a film is now in the making – ‘The Autorikshaw Driver’s Wife’, based on my story by the same name. Shooting will begin next month,” Mukundan concluded.

READ MORE-Have a brand new beginning with these books