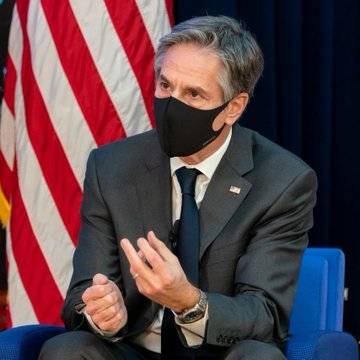 Secretary of State reiterates support for returning to the nuclear accord, with which UN inspectors said Iran was complying before Trump pulled out the US, reports Asian Lite News

Secretary of State Antony Blinken said “hundreds” of US sanctions will remain on Iran even if the United States rejoins a nuclear accord.

The US has been engaged in indirect talks with Iran about reversing former president Donald Trump’s exit from the 2015 nuclear accord, formally known as the Joint Comprehensive Plan of Action (JCPOA).

“I would anticipate that, even in the event of a return to compliance with the JCPOA, hundreds of sanctions remain in place, including sanctions imposed by the Trump administration,” Blinken told a Senate hearing.

“If they are not inconsistent with the JCPOA, they will remain unless and until Iran’s behavior changes,” he said.

The discussions in Vienna, brokered by European diplomats, have been locked in dispute on which sanctions to lift.

The Biden administration is ready to end the sweeping measures imposed by Trump — including an effort to stop all of Iran’s oil exports — if it reverses the steps away from the nuclear deal that it took to protest the last administration’s sanctions.

But Iran has insisted on a removal of all sanctions — while the Biden administration has insisted that some will remain if they were imposed over other concerns, including human rights and Iran’s support for extremist movements.

Blinken reiterated support for returning to the nuclear accord, with which UN inspectors said Iran was complying before Trump pulled out the United States.

Asked about concerns that Iran did not declare all activities from before the nuclear deal, Blinken said: “Plain and simple, we would be in an even better place to insist on it answering those questions if we had managed to get Iran back into compliance with the JCPOA and if we were part of it, too.”

“But regardless, it needs to answer those questions. It needs to come clean about past activities,” Blinken said.

Meanwhile, the US told Iran on Tuesday that it must let the UN atomic agency continue to monitor its activities, as laid out in an agreement that has been extended until June 24, or put wider talks on reviving the Iran nuclear deal at risk.

The International Atomic Energy Agency and Iran reached a three-month agreement in February cushioning the blow of Tehran’s decision to reduce its cooperation with the agency by ending extra monitoring measures introduced by the 2015 deal.

Under that new side agreement, which on May 24 was extended by a month, data continues to be collected in a black-box-type arrangement, with the IAEA only able to access it at a later date. It is unclear whether the agreement will be extended again; the IAEA has said such negotiations are getting harder.

“We strongly encourage Iran to avoid any action that would prevent the collection of or IAEA access to the information necessary for it to quickly re-establish … continuity of knowledge,” a US statement to a meeting of the International Atomic Energy Agency’s 35-nation Board of Governors said.

“Such action would, at a minimum, seriously complicate ongoing efforts to reach an understanding on how Iran can return to compliance with its JCPOA commitments in return for a similar US resumption,” it added, referring to the 2015 deal by its full name, the Joint Comprehensive Plan of Action.

Indirect US-Iran talks on reviving the deal are due to resume in Vienna this week. The data covered by the separate IAEA-Iran agreement includes real-time uranium enrichment levels as well as whether centrifuges, machines that enrich uranium, remained in storage and the production of centrifuge parts.

ALSO READ: Blinken pledges visas for Afghans who helped US