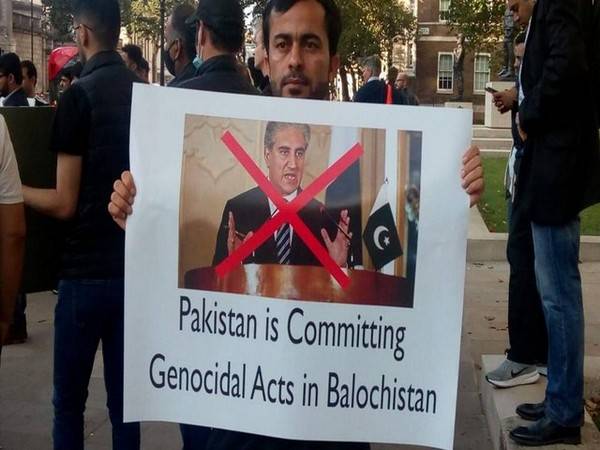 They raised slogans about the enforced disappearance campaign run by the Pakistani intelligence agencies, which kidnap journalists, political activists, and anyone who dares to question them…reports Asian Lite News

Pakistan Foreign Minister Shah Mahmood Qureshi faced yet another protest by the Baloch and Sindh diaspora in London on Sunday. The protest was held at parliament square.

The protestors demanded that the UK must stop funding to Pakistan, which is run by a brutal regime killing its dissidents and suppressing its minorities.

They raised slogans about the enforced disappearance campaign run by the Pakistani intelligence agencies, which kidnap journalists, political activists, and anyone who dares to question them.

The protestors called it a sectarian genocide regime, which is destroying the lives of Baloch, Hazaras, Hindus, Sikhs and Ahmadiya minorities and has virtually made them refugees in their own land.

The protestors expressed their intention to formally complain to the British government and its parliamentarians about their silence on the duplicitous role of Pakistan in Afghanistan, which is unfolding into a humanitarian crisis.

The widespread protests against the visiting foreign minister are unprecedented as London has never witnessed anything at this scale by the Pakistani diaspora against the country’s visiting delegation.

Earlier, scores of protestors had gathered outside the residence of the Pakistan High Commissioner in London and raised slogans against the Pakistan government on Sunday.

The protest held on September 26 was led by the Sindhi Baloch Forum (SBF). They also presented a petition to the UK Prime Minister Boris Johnson calling for an end to the use of UK taxpayer’s money to support a state that sponsors terrorist organisations committing human rights atrocities.

The protestors carried banners and raised slogans against the Pakistan military’s atrocities against the Baloch people. They demanded the immediate release of previously abducted Baloch people and the stopping of more enforced disappearances.

They also urged the international community, including the UK, to stop supporting Pakistan as this is allowing Islamabad to commit more crimes against humanity.

Several Baloch and other human rights activists joined the protest from different cities of the UK and expressed their support for the families of those who have been forcefully disappeared.

Sindh and Balochistan are witnessing a rapid increase in the forcible disappearances of Sindhi and Baloch dissidents by the Pakistani military and its paramilitaries.

Sneha Dubey, India’s First Secretary had during the 76th session of the United Nations General Assembly slammed Pakistan Prime Minister Imran Khan in its Right of Reply for suppressing its minority communities.

“Today, the minorities in Pakistan – the Sikhs, Hindus, Christians – live in constant fear and state-sponsored suppression of their rights. This is a regime where anti-Semitism is normalized by its leadership and even justified,” the First Secretary said.