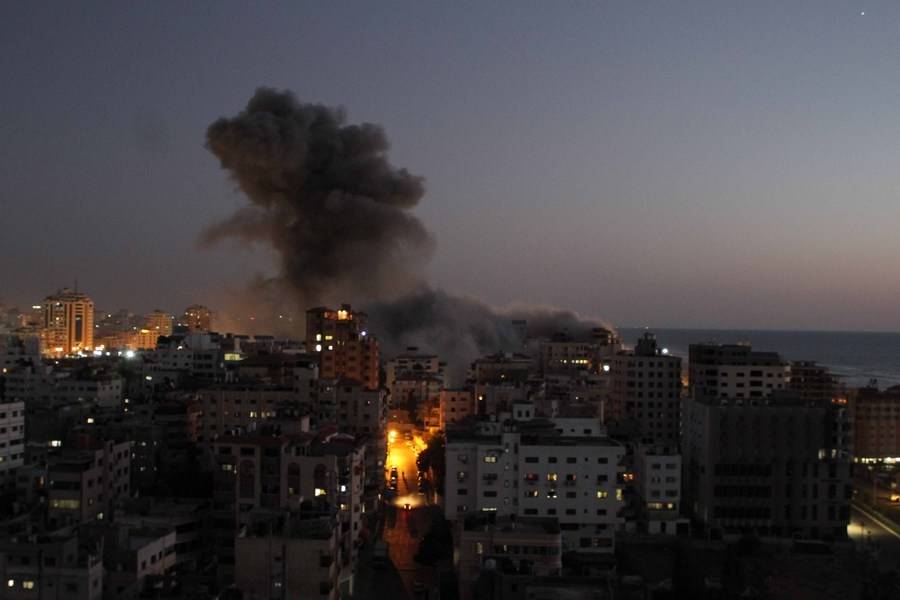 There are growing fears that violence between both sides could spiral into “full-scale war.”..reports Asian Lite News

The tit-for-tat trade of fire between militant groups in the Gaza Strip and Israel has been mounting on Wednesday, leaving 50 killed and dozens of others wounded from both Palestine and Israel.

There are growing fears that violence between both sides could spiral into “full-scale war.”

The rocket fire and rioting killed at least 43 people in Gaza, including 13 children, two Palestinians in the West Bank, and five Israelis, according to latest news reports.

The Israeli Army on Wednesday said over 1,050 rockets and mortar shells were fired from the Gaza Strip towards Israel since the violence broke out on Monday evening.

Israel defence forces (IDF) Spokesperson Hidai Zilberman said the Iron Dome air defence system had an interception rate between 85 and 90 per cent of rockets heading toward populated areas, The Times of Israel reported.

In response, the IDF launched strikes on upwards of 500 targets in the Gaza Strip, aimed at Hamas personnel, weaponry and infrastructure, Zilberman says.

A wall of dark gray smoke rose over Gaza City and observers in Gaza said that it is one of the heaviest Israeli strikes ever.

The ongoing violence marks a dramatic escalation of tensions linked to the potential eviction of Palestinian families from East Jerusalem by Israeli settlers and access to one of the most sacred sites in the city, which is a key hub for Islam, Judaism and Christianity.

The confrontation intensified in recent days as Ramzan brought large crowds to al-Aqsa and clashes broke out between Palestinians and Israeli police. More than 300 Palestinians were injured on Monday.

The protests spread to other Arab areas inside Israel. In the mixed Jewish-Arab city of Lod, Arab protesters threw stones and fireworks at passersby and police early Tuesday. And a man whose identity has not been disclosed opened fire on a group of Arab protesters carrying Palestinian flags, The Washington Post reported.

More than 1,100 Palestinians were injured in clashes with the Israeli military on May 7-10, according to the Office of the United Nations High Commissioner for Human Rights (OHCHR).

Health authorities in Gaza said at least 36 Palestinians – including 10 children – were killed in Israeli airstrikes on the Strip since late on Monday, after Hamas launched rockets from the coastal territory towards Israel. At least 250 others were injured.

At least five people in Israel have also been killed.

The security forces in Israel are bracing up for further violence. Police Commissioner Kobi Shabtai ordered a “significant” bolstering of police presence in the city of Lod and a number of other locations after Public Security Minister Amir Ohana declared a state of emergency. (with inputs from ANI)