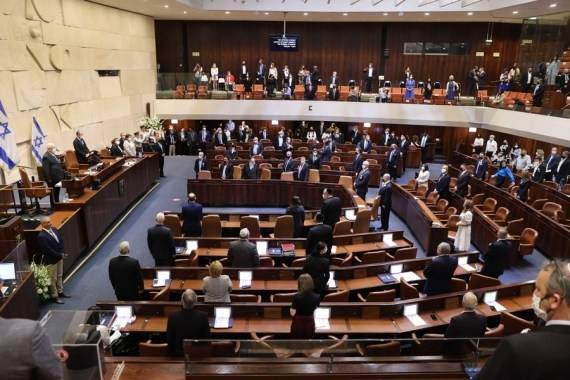 The swearing in ceremony on Tuesday marked the inauguration of Israel’s 24th Knesset or Parliament and the ceremony started with an address by President Reuven Rivlin….reports Asian Lite News

Newly-elected Israeli lawmakers were sworn in amid uncertainties over the possibility of forming a new government two weeks after the country’s fourth election in two years also ended in a stalemate.

The swearing in ceremony on Tuesday marked the inauguration of Israel’s 24th Knesset or Parliament, reports Xinhua news agency.

The event began with an address by President Reuven Rivlin to the newly-elected 120 members of the Knesset.

He urged the lawmakers to show leadership and end the prolonged political deadlock.

“The Israeli people expect each one of you to show leadership,” he said in televised remarks.

Rivlin entrusted the longest-serving Prime Minister with the task as the latter held the most support, 52 seats, but still runs short of 61 seats needed to form a majority coalition in the Knesset.

The decision means that Netanyahu now has 28 days to put together a coalition government, with a possibility of a two-week extension before Rivlin tasks another candidate or asks the Knesset to choose one.

Netanyahu, who has been in power since 2009, is facing a criminal trial over corruption charges in three separate cases.

His trial in the Jerusalem District Court resumed on Monday with the prosecution’s opening arguments.

No party gained enough votes to form a majority government in the March 23 elections.

It was Israel’s fourth election in two years amid a lingering political deadlock.

The last election resulted in a broad, unstable coalition of political enemies that would have seen them taking turns in the Prime Minister’s office.

It collapsed after only a few months amid a fight about the budget.