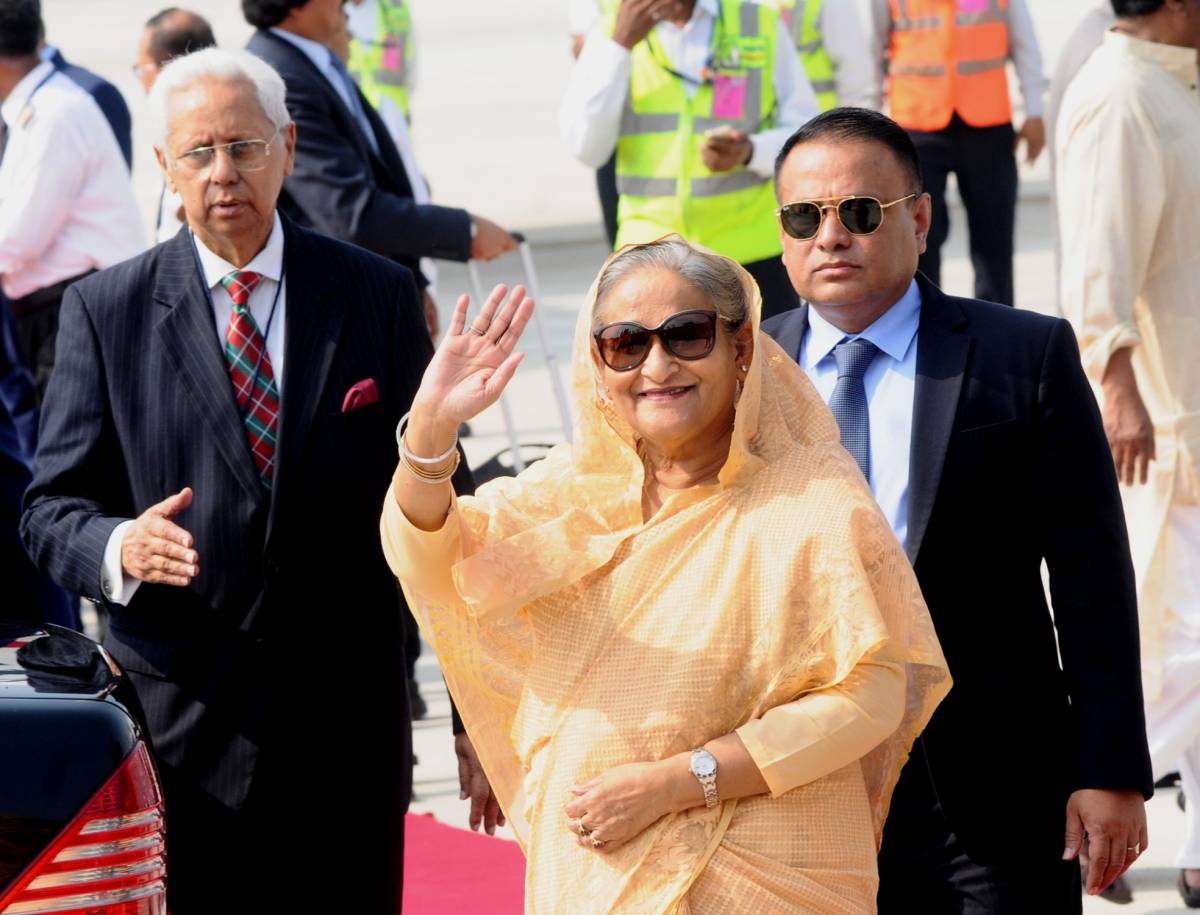 Hasina will most be remembered for her role in the restoration of democracy by bringing down a local military regime, like her father had brought the Pakistani military junta…reports Sumi Khan

Bangladesh Prime Minister Sheikh Hasina turns 75 on Tuesday, and the government will organise a mass Covid vaccination programme to mark the occasion.

Announcing the programme, Health and Family Welfare Minister Zahid Maleque said: “The mass vaccination campaign is set to begin from 9 a.m. (on Tuesday) and it will continue till the target of 80 lakh is fulfilled.”

The government has prepared 80,000 health workers including over 48,000 volunteers to make the vaccination campaign a success, Maleque told IANS on Monday evening.

He said that people aged 25 and above will be vaccinated besides those who have already completed the registration process will get priority.

Sheikh Hasina, the eldest among the five children of Bangabandhu Sheikh Mujibur Rahman and Sheikh Fazilatunnesa Mujib, was born at Tungipara in Gopalganj on September 28, 1947 – shortly after the subcontinent’s independence and partition.

Now in her fourth term, the archetypal Bengali housewife of scientist Wazed Ali Mia, with some exposure in student politics, looms large in her country’s esteem by not only returnubf to her country at great personal risk but also reorganising and leading its biggest political party Awami League, founded by her father, before toppling the Gen Mohammad Ershad-led military regime.

It was a tough decision to return to Bangladesh seven years after her entire family was wiped out brutally in 1975, and to stick on despite a number of assassination bids.

Each of these decisions required not just courage but a determination to uphold and build on her father’s legacy and a deep faith in her destiny.

Hasina would deny it, but analysts see in her success not only courage and determination but the presence of a sharp analytical mind which can plan ahead and anticipate challenges.

The spotlight is firmly on her success in scripting a socially inclusive economic turnaround for Bangladesh, from the 1975 ‘basket case’ as termed by US Secretary of State Henry Kissinger.

But Hasina will most be remembered for her role in the restoration of democracy by bringing down a local military regime, like her father had brought the Pakistani military junta, and in sustaining it against a persisting threat from radical Islamist forces, who threaten her regime with violent street agitations, militancy, terror strikes and systematic disinformation.

Late Indian President Pranab Mukherjee, whom Hasina said she respected as her ‘Obhivabak’ (guardian), once told journalists to imagine what Angela Merkel or Jacinda Arden would have done, if they faced the lurking threat of assassination, having survived many like Hasina.

Mukherjee’s take was when it comes to ‘raw courage’, Hasina is comparable to only Indira Gandhi who refused to shed her Sikh bodyguards despite firm intelligence warnings of a lurking physical threat after Operation Bluestar.

But Hasina, who is deeply religious personally but secular politically, maintains: “If Allah desires, I will live and all conspiracies to kill me will fail… But if Allah does not desire I should live, who am I to question his will.”

As a Leader of Opposition, she suffered a deadly attempt on her life by top militants of HUJI, paid by ISI on August 21, 2004.

The grenade and gunfire left 24 leaders and party activists dead. Hasina barely survived with a hearing problem, as did many of her senior party leaders. For someone who had seen almost her entire family wiped out in a violent coup 29 years ago, it was indeed a tough decision to continue in politics.

Hasina is a fast learner as well, as her policies on combating climate change would indicate. But what makes her achievement shine is her humility.

From combating the Covid pandemic to maintaining the country’s rising growth curve during the crisis, Hasina’s leadership has been a blessing for Bangladesh.

If her father drew global attention to the Bangla language through a UNGA speech in 1974, she was responsible for getting February 21 UNESCO’s recognition as International Languages Day, drawing the spotlight on the seven largest linguistic groups in the world.

As Sheikh Mujib wanted a smile on the faces of the poorest, Hasina has been responsible for a huge ‘trickle down’ humanitarian economy that benefits the most vulnerable. And this is in a neo-liberal era when the focus is on wealth creation and growth and not so much on distributive justice.

Just before Hasina formed the government for the second time in 2009, the world was begun finger Bangladesh as “another Afghanistan”.

The Islamist radicals of Bangladesh, back after being trained by Osama Bin Laden in Pakistan and Afghanistan, shouted slogans like “Amra shobai Taliban, Bangla Hobe Afghan” (We all are the Taliban, Bangladesh will be Afghanistan), as the systematic Pakistani-style sponsorship of terrorism by the Khaleda Zia’s BNP and Jamaat-e-Islami alliance government was threatening to take Bangladesh down the Pakistani path.

Hasina not only arrested that trend by her firm “zero tolerance to terror” but also enhanced intelligence cooperation with India to thwart a long-term threat to the whole region.

Her detractors have blamed Hasina for creating a police state and hauled her up for “forced disappearances” and “extra judicial executions” but sources close to her argue that she has no choice but to resort to tough policing to keep Islamist radicals at bay.

For India, Hasina’s decade in power has been a boon. By pushing out the Northeastern rebels and demolishing their bases that had sprouted under the Zia regime, she addressed India’s security concerns.

By allowing transit to the Northeast from the Indian mainland and use of Bangladesh’s ports, Hasina has helped India energise its ‘Act East’ thrust. She formally recognised India’s role in her country’s freedom by awarding gold medals to many Indians who helped in 1971 the ‘Muktijuddho Padak’ (Liberation War medal) but also by naming a road in Dhaka after Indira Gandhi. Indian PM Narendra Modi was the special guest at the Golden Jubilee Celebrations of Bangladesh Independence in March and Hasina crushed the radical Islamist violence protesting his visit.