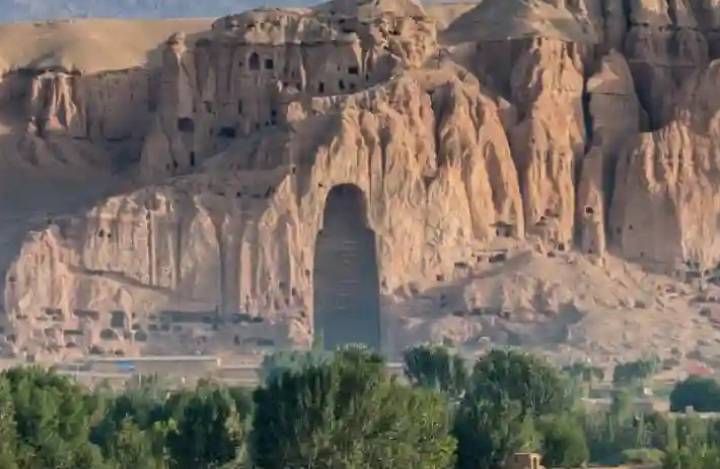 The 2001 destruction in Bamiyan is, by far, the most spectacular attack against the historical and cultural heritage of Afghanistan ever committed during the recent period of turmoil the country has passed through-a period that began with the Communist Coup of April 1978, a report by Mrityunjoy Kumar Jha

First the Taliban destroyed the iconic 6th-century Buddha statues in 2001, triggering outrage across the globe. But now, with international recognition nowhere in sight, the Taliban now say they have become saviours of Buddhist relics, that would bring tourists to Bamiyan, the province that is separated from the rest of Afghanistan by the famous Salang pass.

“As an Islamic Emirate’s official in Bamiyan, I am trying my best to preserve these priceless and historical monuments of our province. Local and foreign tourists can visit Bamiyan’s historical sites and Buddhas,” Mawlawi Saif-ul-Rahman Mohammadi, Head of Bamiyan’s Information and Culture Directorate told the state-run Ariana news.

But then, why did the Taliban destroy the Bamiyan Buddhas in 2001.

Mohammadi justifies the previous decision saying that they destroyed the Buddhas based on religious ideology in 2001.

“The Islamic Emirate did not make a hasty decision at that time [2001], it was reviewed and researched based on Islamic laws and then they destroyed them,” he said.

The 2001 destruction in Bamiyan is, by far, the most spectacular attack against the historical and cultural heritage of Afghanistan ever committed during the recent period of turmoil the country has passed through-a period that began with the Communist Coup of April 1978.

Ironically, Mullah Hasan Akhund, who executed the order of the founder of the Taliban- Mullah Omar, is now the Prime Minister of the new Taliban government. The same man is now promising to safeguard all ancient heritage of Afghanistan. During the fight for Kabul, which ended on August 15, the group had asked their fighters to “robustly protect, monitor and preserve” relics, halt illegal digs, and safeguard “all historic sites.” They have forbidden selling of artefacts in the art market. Their statement said: “No one should try to disturb such sites or think about using them for profit.”

At the crossroads of Chinese, Indian, and European civilizations, Afghanistan was once better known for its wealth of cultural history stretching back 3,000 years. Afghanistan is the destination from where Buddhism spread to China, and it is this hallowed ground, Zoroastrianism, Christianity, Judaism, and Hinduism flourished, both before and after the advent of Islam in the 7th Century AD.

In addition to the Buddhas of Bamiyan, the entire Bamiyan Valley is laden with ancient archaeological remains, some of which were stolen by Taliban fighters in August this year after the fall of Kabul. The area is also the heartland of the Hazaras, the Shia minority persecuted by the Taliban. In mid-August Taliban fighters blew up a statue of Abdul Ali Mazari, a Hazara leader they executed in 1995.

Now back in power, the Taliban are promising to be a very different kind of ruling authority. They have posted guards outside the National Museum in Kabul. But there are many other museums throughout the country, as well as sites such as the Old City of Herat.

While the words are fine, it is the Taliban’s actions that will count. So far, the Taliban has not been following promises it made in Doha that includes mainly preserving human rights, women’s rights and education and inclusive government.

Many Archaeologists and curators responsible for preserving Afghanistan’s national heritage have already left the country. There is fear that the Taliban government will not allow contemporary artists to work. The world already saw what happened in the last few weeks: they enacted a music ban and forced art galleries to close. Several singers and artists have already left the country. The Taliban has also destroyed their galleries and their equipment following their departure.

The UN cultural agency has called for the preservation of Afghanistan’s cultural heritage in its diversity and in full respect of international law.

This statement comes a few days after the Taliban blew up slain Hazara leader Abdul Ali Mazari’s statue in Bamiyan, a grim reminder of the destruction of Bamiyan Buddhas in 2001.

“Afghanistan is home to a wide range of rich and diverse heritage, which is an integral part of Afghan history and identity, as well as of importance for humanity as a whole, that must be safeguarded,” the UNESCO statement said.

Amid the rapidly unfolding events, UNESCO is closely following the situation on the ground and is committed to exercising all possible efforts to safeguard the invaluable cultural heritage of the country.

In a statement issued on Thursday, the UN agency said that any damage or loss of cultural heritage will only have adverse consequences on the prospects for lasting peace and humanitarian relief for the people of Afghanistan.

UNESCO further underlined the need for a safe environment for the ongoing work of the country’s cultural heritage professionals and artists.

It is crucial for the future of Afghanistan to safeguard and preserve these landmarks, the statement added.

(The content is being carried under an arrangement with indianarrative.com) (with inputs from ANI)

ALSO READ: Hardliners could take Taliban to what it was 20 years ago: Imran