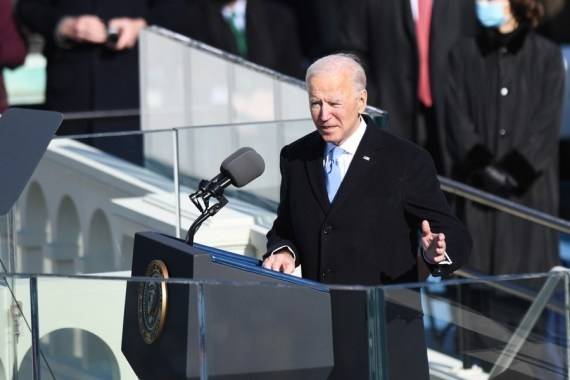 “It’s going to be hard to meet the May 1 deadline. Just in terms of tactical reasons, it’s hard to get those troops out.”said Biden…reports Asian Lite News

President Joe Biden has indicated that the US is unlikely to meet the May 1 deadline set by his predecessor Donald Trump to get American troops out of Afghanistan.

Addressing a news conference in Washington on Thursday, Biden said: “It’s going to be hard to meet the May 1 deadline. Just in terms of tactical reasons, it’s hard to get those troops out.”

He said that the US was consulting its NATO allies who also have troops there “and if we leave, we’re going to do so in a safe and orderly way”.

Replying to a question, the President said that he could not see the troops still being in Afghanistan next year.

“It is not my intention to stay there for a long time. But the question is how and in what circumstances do we meet that agreement that was made by President Trump to leave under a deal that looks like it’s not being able to be worked out to begin with? How is that done?”

He appeared to question the legitimacy of the democratically elected Afghanistan President Ashraf Ghani by disparaging referring to him as “the ‘leader’, quote, in Afghanistan and Kabul”.

Defence Secretary Lloyd Austin “just met with Ghani and I’m waiting for the briefing on that. He is the the ‘leader’, quote, in Afghanistan and Kabul”, he said.

More than 20 years after the US and NATO troops were sent to Afghanistan to root out the Al Qaeda terror organisation and the Taliban that provided it bases, about 2,500 American troops remaining there, although down from about 100,000 at the height of the deployment in 2010.

Trump started negotiations with the Taliban for a peace settlement in Afghanistan and had set the May 1, 2021, deadline for the troops to return home.

Biden has kept on Zalmay Khalilzad, who was appointed by Trump as the special envoy for Afghanistan Reconciliation, and is still trying to seal a peace deal.