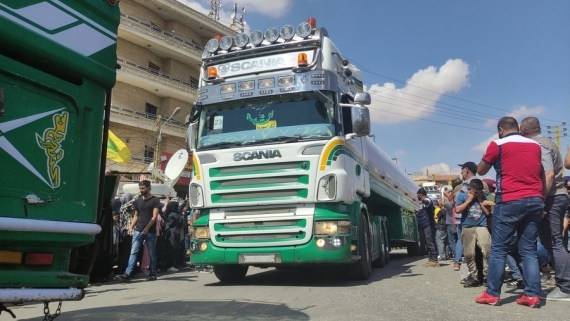 A vessel carrying Iranian oil docked in Syria on Sunday, and the oil was unloaded in trucks and sent by land to the Bekaa Valley on Thursday, reports Xinhua news agency.

Lebanon has been suffering from shortage of US currency reserves, which deprives the country from importing its oil needs.

Hezbollah leader Sayyed Hassan Nasrallah announced on Monday that a second ship with fuel oil would arrive in the Syrian port of Baniyas in a few days, and Lebanon is expected to receive two more ships carrying gasoline and fuel oil.

Some Lebanese anti-Hezbollah parties expressed over the past few days their concerns over the possibility of the US imposing sanctions on Lebanon after its oil imports from Iran.

“We will initiate talks with the IMF and World Bank for financing, as there is an international will to help us,” Aoun said during his meeting at Baabda Palace with a delegation from the labour confederation on Wednesday.

He added that economy will be the main priority in the coming period.

Aoun said that the new cabinet will launch several projects, including the construction of power stations and the reconstruction of the Beirut port which was destroyed by two huge explosions on August 4, 2020.

Lebanon formed a new cabinet on September 10, breaking 13 months of political deadlock in the crisis-torn country.

The 24 cabinet ministers, who are not official members of Lebanon’s different political parties, were appointed by ruling authorities based on their political affiliations.

According to the new Prime Minister Najib Mikati, his cabinet is formed of specialists who are keen to stop the country’s current collapse by dealing with urgent issues, including the negative repercussions of lifting subsidies.

Since the Beirut port explosions and the resignation of the government of Prime Minister Hassan Diab last year, Lebanese citizens and experts have been calling for an efficient cabinet capable of undertaking major reforms such as the overhaul of the electricity sector, the restructuring of the public sector and the fight against corruption.

However, differences among political parties over the ministerial shares’ distribution delayed the cabinet formation which exacerbated the country’s financial and economic crisis, with about 74 per cent of the population living in poverty now.