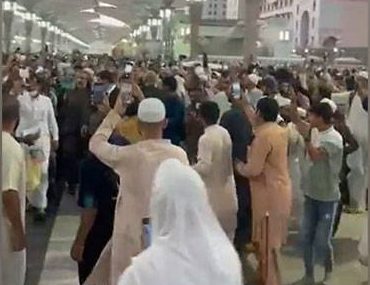 The spokesperson of the Madinah police said that the suspects have been referred to the competent authorities after completing the legal procedures.

The spokesperson of the Madinah police said that the suspects have been referred to the competent authorities after completing the legal procedures, Geo TV reported citing Saudi Publication Saudi Gazette.

“Their actions contradict the sanctity of the place and impact the safety of visitors and worshipers,” said the spokesperson.

On Thursday, some protesters, allegedly belonging to the Pakistan Tehreek-e-Insaf (PTI), violated the sanctity of the Masjid-e-Nabawi by loudly chanting slogans against Prime Minister Shehbaz Sharif’s delegation.

Earlier in the day, the Director of Information at the Saudi Arabia Embassy in Islamabad confirmed the arrest of Pakistani nationals and said that an investigation has been launched into this matter, reported Geo TV.

A viral video has been circulating on social media platforms that showed hundreds of pilgrims raising “chor chor” [thieves] slogans upon seeing the delegation making their way to Masjid-e-Nabawi.

In a video, Information Minister Marriyum Aurangzeb and member of the National Assembly Shahzain Bugti were seen along with others.

According to the Pakistani newspaper, Aurangzeb indirectly blamed ousted Imran Khan for the protest.

“I will not name this person on this holy land because I do not want to use this land for politics. But they have destroyed the [Pakistani] society,” The Express Tribune quoted Aurangzeb as saying.

Taking to Twitter and sharing the video, a netizen wrote, “Proud Pakistanis, please be heartened by witnessing what a wonderful welcome our PM and his Pakistan Democratic Movement (PDM) gang of criminals got in Saudi Arabia.”

Sharif was sworn in as Pakistan’s 23rd Prime Minister on April 11 after his predecessor Imran Khan was ousted in a no-confidence vote. (ANI)